Jerusalem: Chronicles from the Holy City 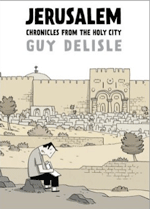 I started Guy DeLisle’s 300-plus-page Jerusalem with interest; I finished it in anger.

Some background: Delisle has made his career by going to unusual places. His best-known graphic memoir, 2004’s Pyongyang, covers two months spent in North Korea, where DeLisle is alienated, bored, and culture shocked. He is also alarmed at the spooky machinations of the totalitarian state. He has also written similar travel memoirs about Shenzen, China, and about Myanmar.

I wanted to start with this background because I think that Delisle’s experience in these places — all three of them in various levels of humanitarian crisis — shaped his expectations of himself as a nonfiction cartoonist. In North Korea, for example, Delisle was kept isolated on a single floor of one of the city’s huge empty hotels — which was intentionally staffed entirely by Chinese guest workers, to prevent even the chance conversation with a Korean maid or bellhop. The few Koreans he came into contact with are either government handlers or non-English speakers. Had he made an attempt to ask questions of locals, it would have endangered his informants and himself.

So DeLisle’s Pyongyang is strictly subjective: he can report only the little he observed, often without context. It’s a shtick that has worked for him.

But Israel is not North Korea. Despite the injustices and human-rights abuses of the Israeli government, the country is open to foreigners, has a high percentage of English speakers, and most crucially, has a free press. (As a result it has been covered rather thoroughly in nonfiction and fiction comics — including Rutu Modan's Exit Wounds, Sarah Gidden's How to Understand Israel in 60 Days or Less, and of course Joe Sacco's Palestine).

Nonetheless, Delisle arrives, along with his NGO-worker girlfriend and their two children, in a state of general ignorance. Despite his professions of atheism, his frame of reference is Christian: he marvels that he’s walking in the footsteps of the apostles. He insists on calling Shabbat “the Sabbath.” He is surprised to learn that Yom Kippur is a holiday; he thought it was the name of a war.

Sadly, this ignorance does not get much revised during DeLisle’s year-long Jerusalem sojourn. We get a detailed chronicle of his life as an unemployed ex-pat. “Ah the joys of being a housewife!” he complains, waiting for his wife to arrive home from her work with Doctors Without Borders. We learn that there aren’t a lot of playgrounds in the West Bank, and that traffic in really bad in East Jerusalem. He plays tourist and sketches. On Purim, he goes into the Orthodox quarter to see the Jews in their funny hats stagger around drunk. It’s hilarious.

Most of the people he spends time with are either NGO workers, ex-pats, or Christians. His ignorance of Judaism borders on the offensive; during the entire year, he only once socializes with secular Jewish Israelis (who represent the vast majority of Jews in Israel), and he’s amazed to see them use light switches on the Sabbath, just like regular folks.

His knowledge of Palestinians is hardly any greater, however. In a Palestinian town, he’s shocked to see a woman among the posters of martyrs: “I don't even want to imagine how she ended up here," he says to himself.  "Maybe she was just an innocent victim." (Female suicide bombers have been a particularly Palestinian tactic since 2002). I know that Delisle doesn’t consider himself a journalist, but the artlessness with which he displays his lack of curiosity is alarming.

Perhaps the most infuriating episode, however, is when Delisle gets a gig teaching comics to some Palestinian women at an art school. He remarks that “all but one are veiled” (he’s referring to the hijab, the head scarf, not a face veil) and that they’ve never heard of Tintin. They show him their art projects and tell him their stories:  "One talks about prison. Her fiancé (she met him there) is locked up and she doesn't know when he'll be out. Another talks about sexual abuse and a third, about a brother who died of leukemia."

Yet, Delisle doesn’t feel the need to inquire further or help these women give voice to what sound like extraordinary experiences through comics. "I leave feeling a bit depressed,” he says, “not sure whether we should bother going back to do a workshop." Because they’ve never heard of Tintin? Because they aren’t enlightened secularists? Because their art skills are inferior? What reason could he have for being so uninterested in the people around him? 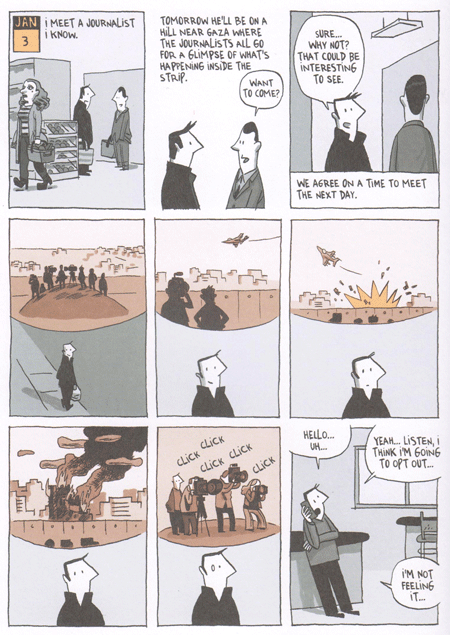 In Pyongyang, witnessing a terrifyingly cheerful concert of girl accordionists, Delisle imagines the grim trajectories of their lives; he writes that he feels like weeping. Here, no such compassion is evident, and its apparent lack — even when a Palestinian babysitter tearfully tells him that her house is to be bulldozed by the Israeli government — is conspicuous. In North Korea, as an observer, Delisle was blinkered by his government handlers. Here, he’s choosing to look away. Given a chance to witness the Israeli bombing of Gaza with some journalists, he feels squeamish ( a series of fumetti show him envisioning the experience being scary) and he decides to skip it.

Delisle has traveled to some extraordinary places, it’s true. But no matter where he goes, it always seems as though he’d really rather have just stayed home.

S.I. Rosenbaum is a journalist and cartoonist from Boston.