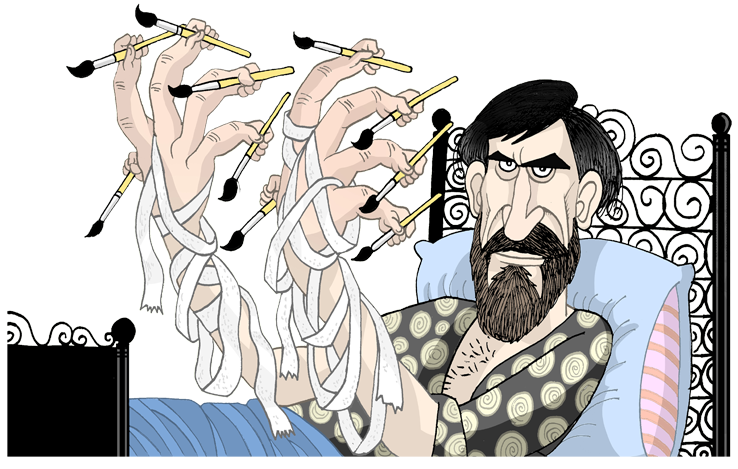 The Cartoonists Rights Network International (CRNI) has announced the winners of the 2012 Courage in Editorial Cartooning Award. The winners are Ali Ferzat, from Syria, and Aseem Trivedi, from India.

Every year, CRNI recognizes a cartoonist who has shown exemplary courage in the face of unrelenting threat, legal action or other pressure as punishment or disincentive for cartoons that are too powerful for some officials, sects, terrorists or demagogues.  This year CRNI recognizes two such cartoonists.

Ali Ferzat was listed by Time magazine as one of the 100 Most Influential People in the World: "Ali Ferzat, 60, spent years drawing insightful cartoons, mostly staying between the prescribed lines of Syria's state-sanctioned media.  But confronted with the regime's increasing brutality, he embraced the democracy movement and turned his lampoons on President Bashar Assad directly."  For this, thugs were ordered to send Ali a message. They brutally beat him up, intentionally breaking both his hands. After the attack, Ali made a second courageous and potentially life-threatening decision. He decided to make public what the Assad Regime had done to him.  The work of this brave and talented artist can be seen online at his website  and on Facebook.

Aseem Trivedi, a young cartoonist from India, like Ali Ferzat, made two courageous decisions.  First, in an atmosphere of increasing censorship and repression in the world's largest democracy, Aseem launched the Cartoons Against Corruption website.  In an effort to mobilize his fellow citizens against India's pervasive political corruption, Aseem filled this site with his anti-corruption cartoons.  After being charged with treason and insulting national symbols, Aseem made his second courageous act. Despite the charges and threats of additional charges, he has taken a leadership role in India's emerging free speech movement.  Joining forces with other free speech activists, Aseem has launched an online freedom of expression campaign called Save Your Voice: A Movement Against Web Censorship.

The award ceremony will take place during the annual convention of the Association of American Editorial Cartoonists (AAEC), on September 15.

CRNI is the only international organization exclusively devoted to defending the human rights of cartoonists imperiled because of their work. Later this month we will publish an interview with the people behind CRNI, Director Robert Russell and Depity Director Drew Rougier-Chapman.