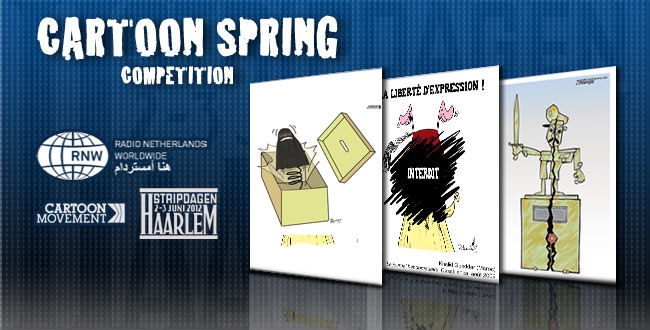 Will you be voting in Egypt’s presidential election? Were you there when Ben Ali’s treasures were revealed? Still feeling the chill in your country despite the arrival of “spring”? Do you feel liberated by the revolution or are you scared? And what should happen now?

Radio Netherlands Worldwide together with Cartoon Movement and Dutch comic festival Stripdagen Haarlem is launching a contest for young cartoonists (<35) from the Arab World on the themes of freedom and the Arab Spring. Send your cartoon interpreting these themes to cartoons@rnw.nl  before May 7th.

A jury of well-known cartoonists including Mohammed Gueddar and Kifah al-Reefi will choose the winning entry. The winner will receive an iPad and membership of Cartoon Movement, the comprehensive online network of professional cartoonists. The ten best entries will be published on the RNW and Cartoon Movement websites and exhibited in the Netherlands.

Cartoon(s) up to a maximum of 25MB can be submitted by e-mail. Larger files should be uploaded to WeTransfer  and a link supplied. File formats should be jpg,  bmp or pdf with a resolution of at least 300 pixels/inch.

Entries should be sent to cartoons@rnw.nl. Entries must be received by RNW no later than 23.59 on May 7th 2012.

Title and short description of the cartoon(s).

Passport-sized photo of the contestant, unless s/he can provide sufficient reason his/her photo should not be published.

In line with RNW’s target audience, the contest is intended for young people of Arab origin. Entry is limited to those under 35. All cartoons submitted must be original and un-published.Contestants may submit a maximum of 3 cartoons.

No more than one cartoon per entrant will be included in the final selection.

If cartoons are captioned, the caption must be in Arabic. Entrants are free to submit a French or English translation in the accompanying e-mail if desired.

The organisers reserve the right to disqualify cartoons deemed insulting or offensive.

The judges’ decision is final and no correspondence will be entered into.

By submitting their entries, cartoonists agree to publication of their work by RNW, Stripdagen, Cartoon Movement and other relevant media partners.

Publication will only occur as part of this competition. If commercial use of the work follows as a result of this publication, any fee, less costs, will be passed on to the cartoonist.

The winner will make him/her self available for interview when the result is announced. The contest is not open to employees or associates of RNW and Stripdagen.

RNW and Stripdagen will make a preliminary selection of 10 cartoons. All entries will be judged anonymously. If it turns out that more than one cartoon by the same entrant has been selected, the second and/or third entries will be dropped and a new selection made.

Any chance to get this information translated into Arabic?

Most certainly, Ethan. Here's the link to the info in Arabic: http://www.rnw.nl/arabic/article/663007