An Interview with Cartoonist Steve Greenberg

By Angelo Lopez. This interview was originally published on  Everyday Citizen and is reposted with their permission. 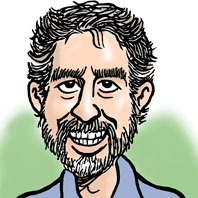 Two years ago I attended a convention of the Association of American Editorial Cartoonists in Portland and met many great editorial cartoonists from around the country. The very first cartoonist that I met was Steve Greenberg and his wife Roberta. Steve Greenberg is one of the most insightful political cartoonists in this country. Steve has several cartoons published in Southern Californian publications, among them the Ventura County Reporter, the influential L.A. news and politics site LA Observed.com and the Jewish Journal of Los Angeles. His cartoons are distributed in PoliticalCartoons.com. He also contributes to the Cartoon Movement out of the Netherlands, the first American cartoonist invited to join. He is also an award-winning informational graphics artist and illustrator.

Your cartoons do a good job of distilling an issue in a single powerful image. What cartoonists or illustrators influenced your style?

Among my strongest influences were Paul Conrad of the Los Angeles Times (this was the paper we read each morning), who was the master of the powerful, searing-image cartoon, Ron Cobb, cartoonist for the underground L.A. Free Press (I never saw that paper at the time, but saw his work via book collections and a gallery exhibit), whose brilliant work blew me away, and Tony Auth of the Philadelphia Inquirer, who taught me how to communicate well with simpler images. There were many others, including 20th century masters Bill Mauldin (whose work I saw in library collections), Britain's David Low (whose work was in my history textbooks) and the brilliant Don Wright. Plus like many Baby-Boomers, I was quite influenced by Mad magazine. 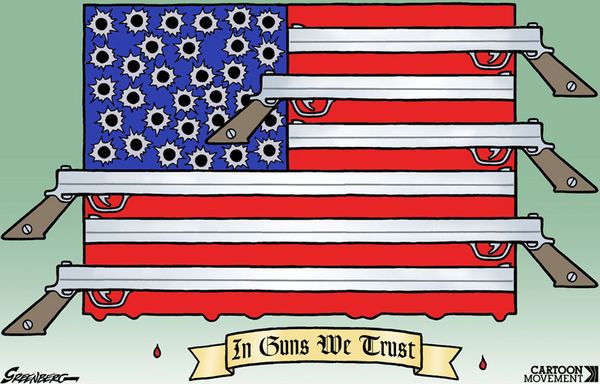 Your cartoons are very critical of the Republican Party. What are your thoughts on how the Republican primaries have gone? Are you looking forward to the 2012 elections?

As a cartoonist, I look forward to the vast amounts of material these people are likely to provide me... but as a citizen, I'm appalled by their backwards, regressive, anti-science, anti-consumer, anti-Middle Class, anti-equality, anti-disadvantaged, anti-environment, anti-reform and pro-greed positions.

You have some of the most insightful cartoons of Israel and their ongoing conflict with the Palestinians. What's your take on obstacles for peace between the Israelis and Palestinians? What periodicals or writers do you read to learn about issues in Israel? 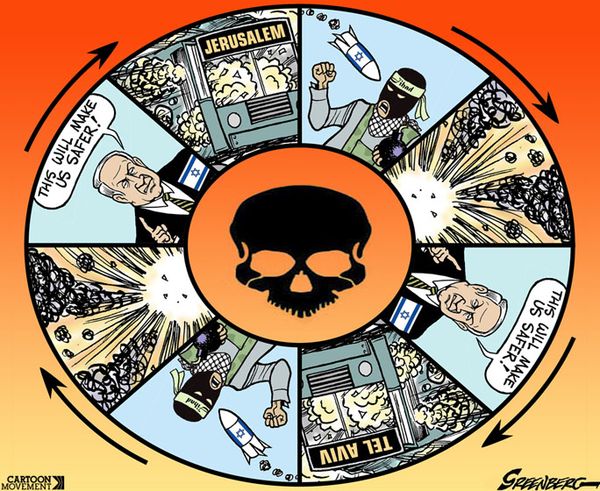 I cartoon weekly for the Jewish Journal of Greater Los Angeles, a gig that sort of just fell into my lap. I read the various opinions there, plus get a constant stream of emails on matters relating to Israel and the Mideast. Many of these are unfailingly pro-Israel, but some are more nuanced and recognize the issues are not one-sided and black and white.

The main obstacles to peace include each side being beholden to domestic interests that would oust them (or worse) if they were seen as too compromising, plus many of the Palestinians seem to have developed a victim mentality that they feel entitles them to not want to compromise (or negotiate) at all.

The nations you mention are all repressive places that lack the same sort of free press that we have, so that strong dissenting voices like cartoonists are seen as threats to the regime that need to be silenced. I don't see any American political cartoonists who have the same sort of influence, and am not sure anyone ever did; perhaps Thomas Nast had the most such impact, in an era of much less literacy. That said, the decline in the (small) influence by American political cartoonists is attributable to the wipeout of so many cartoonists' jobs, the syndicated homogenization of voices in print and the societal change from a small number of mass media voices (one or two daily newspapers per city, three TV networks, a few major magazines) to a highly diffused constellation of thousands of websites and blogs with no one place for a cartoonist to really command the way that, say, Conrad commanded the massively influential L.A. Times of the 1960s and 1970s. 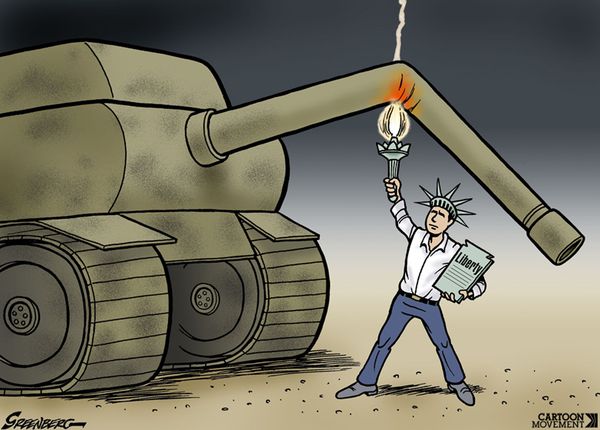 I recently became a cartoonist for a Filipino American newspaper. I'm ashamed to admit though, that I initially didn't know too much about issues in the Filipino American community and have had to do a lot of reading to get up to date on Filipino American issues. You do a lot of cartoons for Jewish publications in Southern California. You seem to have a strong progressive Jewish political point of view. How has been the reception of your cartoons in the Jewish community in your area? Are there any people who've had a particular influence on your political point of view?

I'm a controversial figure within the local Jewish community. The moderate liberals love what I do, but much of the mainstream sees me as too liberal and not sufficiently sympathetic to all that Israel has to go through (while some on the far left see me as too pro-Israel!).

Occupy L.A. was pretty much like it was in the rest of the nation. It's a movement that has no organization, structure or center, just people with some common goals (or complaints)... that's not really a match for powerful, lawyer-laden corporate interests and entrenched political interests, and it hasn't reached enough of a critical mass at this point to have had the impact it hoped for. Money talks louder than ever these days. I was sad to have drawn that cartoon about the futility of "Occupy," but felt it reflected the reality of the situation. That being said, I remember when Howard Jarvis and his tax-reform plans were just a whacko fringe movement... until his Proposition 13 won in 1978. 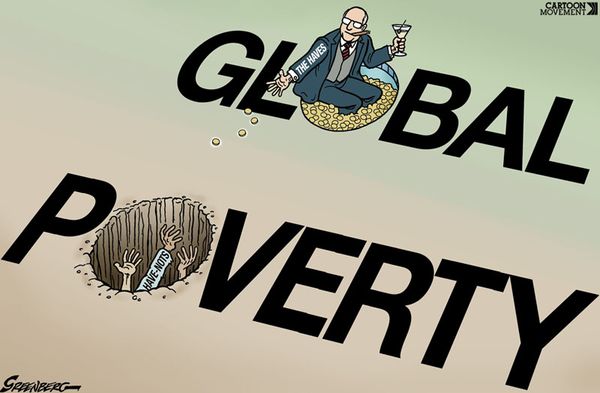 In the early part of the 20th century, radical political cartoonists like Art Young, Boardman Robinson, and Robert Minor took part demonstrations, rallies and other sorts of political activities in addition to doing political cartoons. Do you participate in protests or political rallies?

No. I'm uncomfortable with that, and am not sure if nominally-objective journalists (which includes editorial cartoonists) should be involved with activism. I've spoken on a few occasions, when invited, to Democratic groups, but that's about it. I can't tell other cartoonists what to do, though... I'm personally just introverted and find my comfort level inside at my own drawing board.

How do you create your cartoons?

I sit down with a sheet of blank paper and see what I sketch out. I usually have a topic or two I want to explore, but don't always know what I want to say about it or even what my overall viewpoint is on the topic — I have a sort of dialogue with myself, with my sketches being the feedback. Sometimes I'll have the viewpoint but not the specific idea, sometimes I'll sketch a good concept and it will firm up or even create my viewpoint. On occasion, I'll sketch a good idea that I can't support politically and throw it out. Sometimes I do know exactly what I want to say and how... those are the easier and often better cartoons.

Once I have my idea, I draw it out reasonably quickly in pencil, then go over it with a ballpoint pen to nail down the image. I take this to my light box and draw carefully on better paper (usually a heavy laser paper) with a Uniball Vision pen, then go over those lines with heavier pens like Micron Pigma ones or a Faber-Castell brush marker. I scan the finished linework and go to work in Photoshop, cleaning up the image and adjusting the pieces if necessary, then adding the shading or coloring. I used to hand-letter everything, but I've gotten lazier and my time is limited, so I more often letter with cartoon fonts or with regular fonts for specific uses.

Steve Greenberg is a self-Hating Jew who loves to make fellow Jews (especially orthodox) look real bad in his cartoons.

I just discovered Mr. Greenberg's political cartoons and I'm a new fan. Super, duper work. Not often funny but very to the point and thought provoking.