We have a new added a new section to the website; under the button 'Projects' in the main menu you will find a list of old and current projects, ranging from cartoon exhibitions and educational endeavours to ambitious comics journalism projects.

Each project has its own page, allowing us to present all the material related to a project in one place, whether it be cartoons, comics or video. Please take a look, and don't hesitate to tell us what you think.

Why Being a Libertarian Cartoonist is Liberating

Since then, libertarians have found a small place in the political discussion, but in the world of political cartoons, cartoonists for the most part still fall into the categories of liberal or conservative.  There are exceptions such as Peter Bagge and the now defunct duo of Cox and Forkum, who are well known for holding a libertarian perspective, but for the most part, audiences (and syndicates) expect cartoons to be from either a left wing or right wing perspective.  When they’re not, audiences and editors get confused.  For example, while cartooning for UCLA’s Daily Bruin, I was usually pegged as a conservative cartoonist, because I routinely drew cartoons with polar opposite viewpoints from the paper’s liberal editorial board.  I once drew a cartoon in support of gay marriage and I received several angry emails from readers criticizing me for being anti-gay marriage, simply based on their perception of me from my other cartoons on other unrelated issues.  Despite this, being hard to pin down has its benefits as well, such as crossover appeal, which can help reach wider audiences.  When I post my cartoons online, I find liberal blogs latch on my cartoons attacking the religious right and conservative blogs praise my cartoons that attack government spending.

Still, there are also many topics libertarians focus on that aren’t often drawn about by liberal and conservative cartoonists, such as the war on drugs, fiat currency and the duopoly of America’s two-party system.  I’ve found that the most popular cartoons I’ve done tend to be ones expressing criticism no one else is making.  For example, the debate over whether insurance providers and employers should be mandated to provide free birth control has dominated the headlines in the United States.  While some liberal cartoonists have likened any opposition to the mandate as an attack on women, some conservatives have resorted to shaming the use of birth control entirely.  I found both sides missed the mark in arguing about the merits of birth control instead of focusing on whether the government should be even involved in making such personal choices for individuals or financial choices for insurance companies and employers. 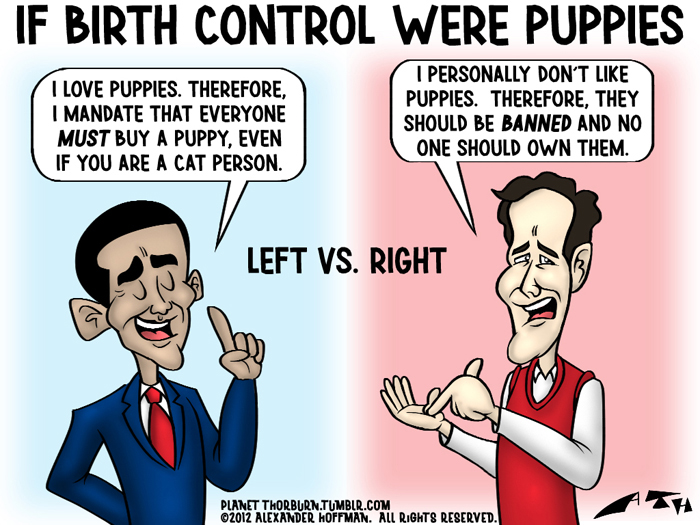 If there’s one benefit to not fitting into the stereotypical Left-Right spectrum, it’s that you are not beholden to any one political party, which is very freeing.  Many of the liberal cartoonists who once attacked Bush’s Patriot Act, are silent on Obama’s National Defense Authorization Act.  Similarly, conservative cartoonists who ignored Bush’s Medicare expansion and out of control spending are more than happy to point out the problems with Obamacare and Obama’s debt.  While I’m not saying editorial cartoonists have to become free market policy wonks, there are benefits in knowing what you believe and sticking to your guns no matter who’s in office.

Headed to South By Southwest this week? Come see our comics journalism editor Matt Bors along with Erin Polgreen, Ron Wimberly, Sarah Jaffe and CM contributor Susie Cagle this Sunday on the panel “How Comics Journalism Is Saving Your Media.”

Cartoon Movement at the LSE 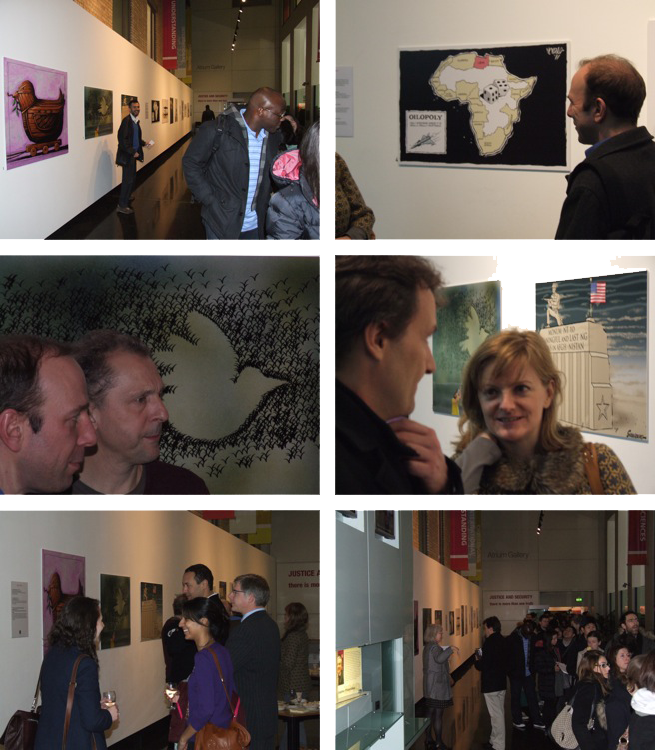 From January 23 until February 17, the London School of Economics hosted a Cartoon Movement exhibition of political cartoons, titled:  Justice and Security: There is More Than One Truth

The photos above give an impression of this exhibition. You can see all the cartoons included in the exhibition in this slideshow. Here's what some of the visitors had to say:

'Amazing cartoons, so pertinent to today's problems. Yet it seems many of us have been demonstrating and protesting for these same war stories and inequalities for many decades now.  Nothing much changes..... Sad. And shameful for the human race.'

'Would rather prefer not sending the military to Africa, so there would be no need of these cartoons.  Buy, hey, we are at LSE, so this a second best situation!  Shame on us.'

'Not sure about your title.  "Only one truth but shades of meaning" perhaps - discuss.  Killing and stuff can't be right.  If you remove the economic injustices then maybe you'll have justice.  Nayer's cartoon is the best for me.'

'Very interesting exhibition, educational and informative.  The pieces are clear to understand and to interpret and are thought-provoking. Excellent.'

Joseba Morales is a cartoonist from Tenerife (Spain). His political cartoons are published regularly  in Ruta 42. In addition, Joseba draws cartoons about sports for Tenerife Deportivo, makes comic strips and book illustrations. His own take on being a cartoonist: 'Basically, I doodle things.' Visit his website, or his Cartoon Movement profile page. 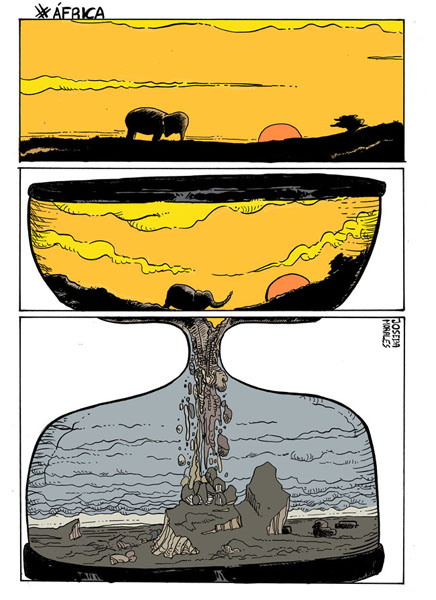