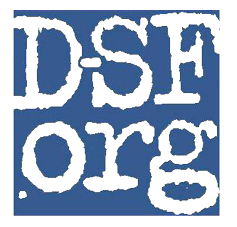 Two of Cartoon Movement's own, Jaume Capdevila and Miguel Villalba Sánchez, better known as KAP and Elchicotriste, have recently set up a non-profit organization that aims to use the power of cartoons for social change: Dibujantes Sin Fronteras (Cartoonists Without Borders).

We talk to Miguel about how and why this organisation, also known as D-SF, was created, what they have done so far,  and what's in store for the coming year.

Where and how and why did you get the idea to start D-SF?

In may 2011, Kap and I were invited to participate in an French-Spanish event about editorial cartooning organized by Cartooning for Peace and the Institut Français de Madrid. During a dinner in the presence of the French ambassador, and other colleagues, we decided to create a social platform that would use the skills and connections of  cartoonists as a practical and immediate tool to support good causes. We felt the name 'Dibujantes sin fronteras'(Cartoonists without borders) would perfectly reflect the spirit of our goals, and the international dimension.

Kap and I have both have experience in the creation of associations or events related with comic art and cartoons, including cultural association 4gags.org, online magazine El Web Negre, and the Comic Art week in Tarragona.

The organization was established in November 2011. What have you done so far?

Since its formation, D-SF has been involved in two projects; we are currently running a third one. 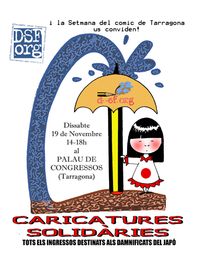 In November 2011, D-SF was present a a big event for Japan organised in the Congress Palace of Tarragona in the presence of the ambassador of Japan. There we made caricatures for charity, with all the money raised going to the to the victims of the Tsunami.

Another project created by D-SF will be ready this month: a book about the economical crisis with the participation of 45 Catalan cartoonists. All the money made from book sales will go to the  to the Arrels Foundation, an organization that helps homeless people.

D-SF is also currently collaborating with an association of bloggers in Tunisia. These were the people that created the momentum for the Arab Spring (like Wilis from Tunis). This association of artists is named Yakayaka; they have an online magazine released every Saturday at yakayaka.org. A set of postcards with the work of a number of Tunisian artists will be prepared by D-SF. The presentation of those postcards will be during a big exhibition for freedom of expression that they are preparing for April. The money raised with the sale of these post cards will go to the victims of the Tunisian revolution.

Cover of the book about the economic crisis, with the work of 45 Catalan cartoonists.

Right now, the main goal of D-SF is to realize practical projects for different causes around the world, using the power of cartoons, without the delay and bureaucracy that characterizes so many non-profit organizations. We can say that we're a drawing 'guerrilla', because of our independence and ability to take immediate action.