When we began Cartoon Movement as an international platform for cartoonists, we had an idea: what if we published comics journalism regularly and treated it like a real thing worthy of respect. That is, what if reporting stories through comics wasn't a novelty, but an actual field comprised of professionals who happen to use cartooning where others use prose or film. What if in the great media transition we are living through, comics were actually a perfect vehicle for telling real stories about real people.

Notice the lack of question marks there.

Comics journalism has received increased attention and legitimacy recently and we'd like to think we've played a part. In our first year of publishing we've gone into the slums of Rio, undercover in America's pregnancy centers, visited Iraqi refugees in Syria, seen numerous Occupy protests, and looked at the Nisoor Square massacre in Iraq in one of the first interactive pieces of comics journalism.

Looking to 2012, we will have much more from contributors who have already written for us as well as many new ones. We will also be launching two major projects that we are very excited about.

Last summer, the Cartoon Movement editorial team went to Haiti in search of cartoonists and journalists to work on a project focusing on the struggles their country face in the aftermath of the devastating earthquake that rocked Port-au-Prince in 2010. On January 12, 2012, the second anniversary of the quake, we will publish the first installment.

But the goal isn't to do a quick check-in on the anniversary and move on, as so many other outlets in the media will be doing. Largely ignored unless a horrifying disaster or coup has made headlines, Cartoon Movement will keep a spotlight on Haiti throughout the year. And we will do it with comics.

Besides using graphic reporting to tell stories, this project will be notable for something else: It will be done by Haitians. The stories told about Haiti to the outside world are typically from foreign aid organizations, visiting journalists, and even celebrities. No more. It's time for Haitians to have a voice. Oh, and we're publishing it in French in Creole so they can read it as well.

Running a total of 75 pages, the project will be illustrated by Chevelin Pierre (who you can see in our first video about the trip) and reported on by a number of Haitian journalists who will all take up a different subject, ranging from NGO money and influence to the recent reformation of the Haitian army. 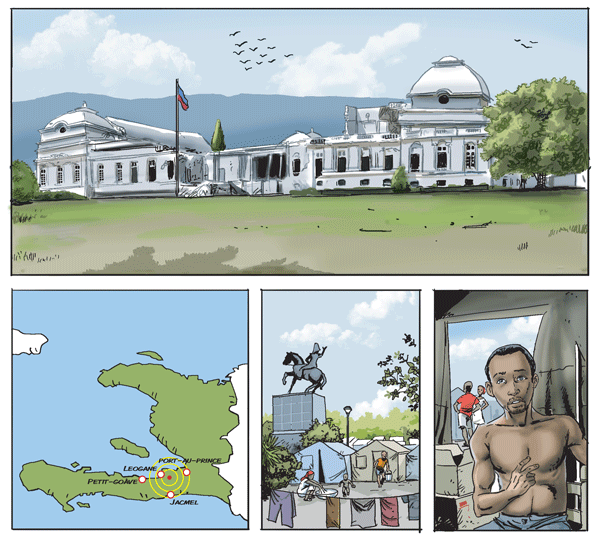 In the summer of 2010, journalist David Axe spent a month reporting from the Democratic Republic of Congo, where the Lord's Resistance Army has created one of the largest humanitarian crises on earth with its campaign of violence and widespread use of rape as a weapon of war.

Beginning in February, Cartoon Movement will publish the first installment of Army Of God, a graphic novel-length work of comics journalism focusing on the brutal LRA, the people they've terrorized, and the people fighting back. Written by Axe, Army of God will be drawn by Tim Hamilton, a Brooklyn based cartoonist and illustrator who adapted Treasure Island and Farenheit 451 into graphic novels. 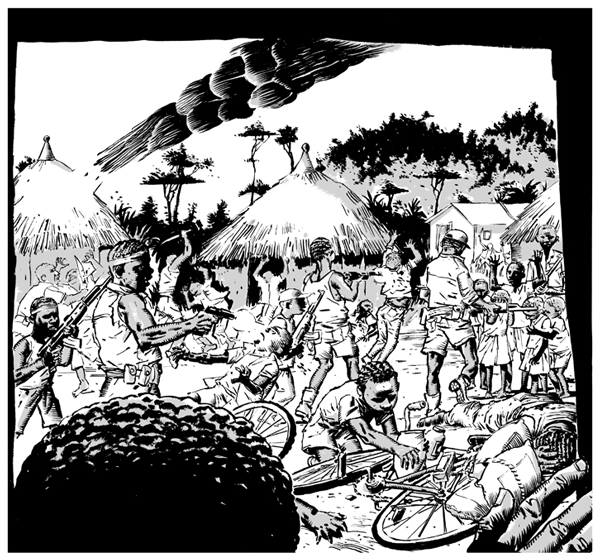 I congratulate the Cartoon Movement editorial team on having Haitians tell the story of Haiti.

But I have to ask: Why didn't you have the Congolese tell the story of the DRC and Kony? There are numerous Congolese caricaturists and journalists who could have done an excellent job in telling this story. In fact, I suggested to Mr. Axe, before he left for the DRC, that he contact and collaborate with some of them.