Cartoon Movement: One Year and Counting...

On Wednesday, December 15, 2010, Cartoon Movement went online, claiming to be the 'the Internet's #1 publishing platform for high quality political cartoons and comics journalism'. Now, exactly one year later, we take a look at this claim, and at what happened in the past year. One thing we can say is that the success of Cartoon Movement has far exceeded our expectations. 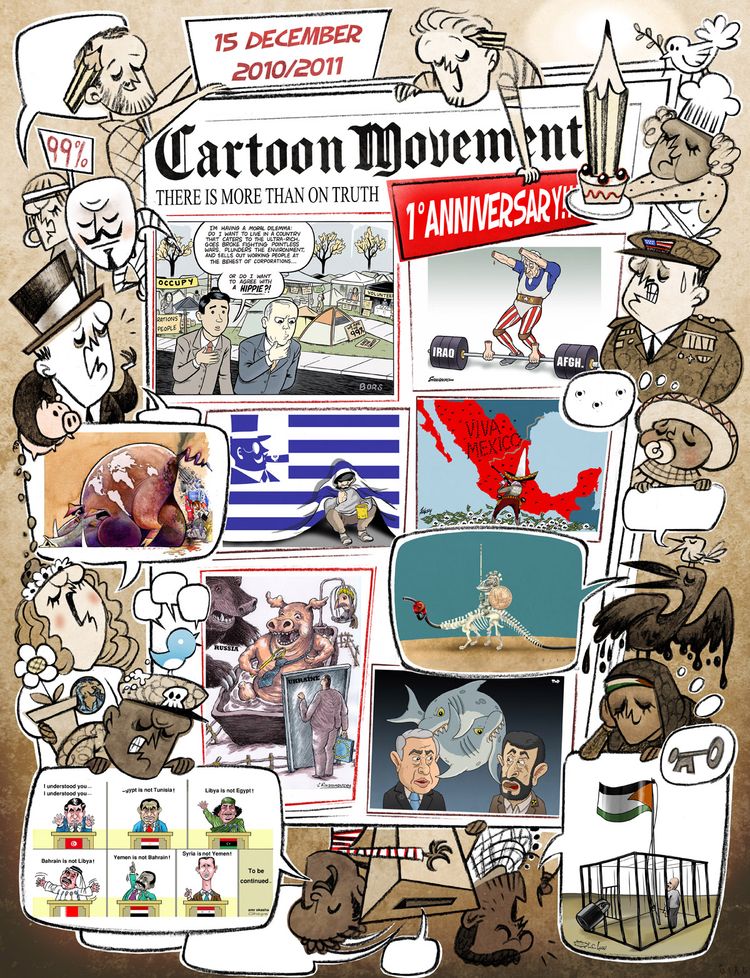 A development that definitely gave Cartoon Movement a boost early on was the Arab Spring, starting in Tunisia in January. Freedom and oppression are much favored subjects among cartoonists, and our freshly designed newsroom flooded with great contributions, giving perspectives from the Arab World, but also from the rest of the world. Check out our slideshows on the Arab Spring, and on Egypt, Libya (and Gaddafi) and Syria for an overview of all these perspectives.

The most special cartoon published in this period (and maybe even the most special cartoon of the whole year) is the one by Egyptian cartoonist Sherif Arafa, made a day after Mubarak finally resigned. It marks the very first time Sherif was able to draw the likeliness of Mubarak in a cartoon; this was a so-called 'red line' when Mubarak was still in power, meaning a cartoonists who was bold enough to draw a caricature of Mubarak was likely to end up in jail. We were very proud to be able to publish this cartoon; it also showed us the impact that our platform could have.

Cartoon Movement is all about providing a platform for visual journalism, and pushing the envelope by publishing new types of content. I had the luck to meet up with brilliant cartoonist Matt Bors just before (and  shortly after for the second time) his trip to Afghanistan in August 2010. My first thought was to have him daw about his experiences in Afghanistan (which he did), but as we started talking about this new platform in the making, it soon became clear that we both thought comics should be an integral part of Cartoon Movement. So we decided to run Cartoon Movement together, myself as editor for the cartoons, and Matt as editor for the comics journalism.

Throughout the year, we've published some truly amazing pieces, showcasing the power of comics as a form of serious journalism. Some of my favorite comics are The Waiting Room  by Sarah Glidden (about Iraqi refugees in Syria), What Every Women Should Know by Susie Cagle (about Crisis Pregnacy Centers, that don't actually offer the option of abortion), and, most recently, a stunning comic by Josh Neufeld about two cartoonists in Bahrain, who find themselves at opposite sides as the Pearl Revolution unfolds.

Page from 'Bahrain: Lines in Ink, Lines in the Sand' by Josh Neufeld 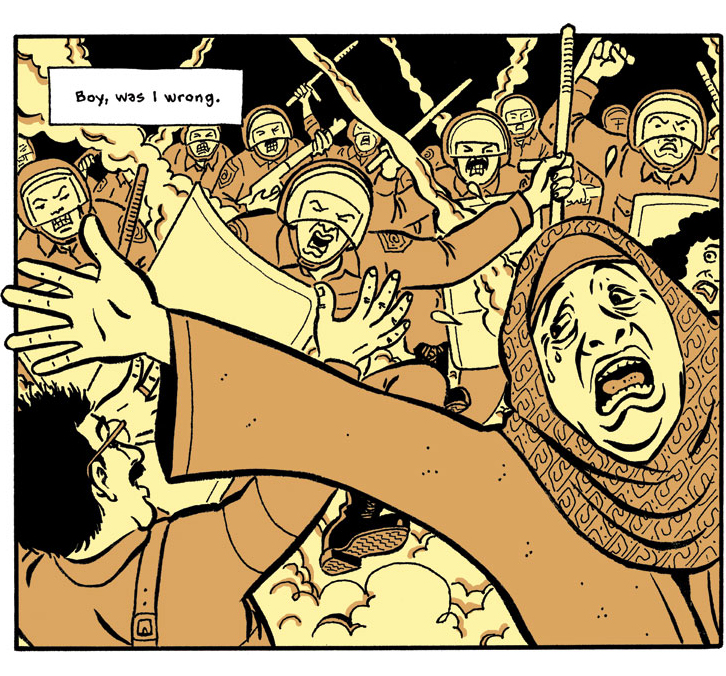 There is more than one truth

The core philosophy behind Cartoon Movement is to publish different perspectives on the international news from different parts of the world. Although cartoonists agree on a lot of issues (as they tend to be a progressive bunch of people), we have had some instances where different points of view became apparent. This was definitely the case after the death of Osama Bin Laden, when our newsroom quickly filled up with cartoons on the issue. You can check out the resulting slideshow here. Worth mentioning is also the international support for Ali Ferzat, the Syrian cartoonist whose hands were broken to stop him from drawing anti-regime cartoons. This international solidarity among cartoonists is also why we started Cartoon Movement.

Out of our philosophy about different perspectives grew our special cartoon projects, set up for other media or organizations. These projects not only help us to continue to pay our  cartoonists for their work, they also are a very interesting way to gather cartoons on a particular issue. Some of the projects we've done in the course of 2011were about freedom, peace and elections in the Arab world.

There Is More Than One Thruth - Victor Ndula 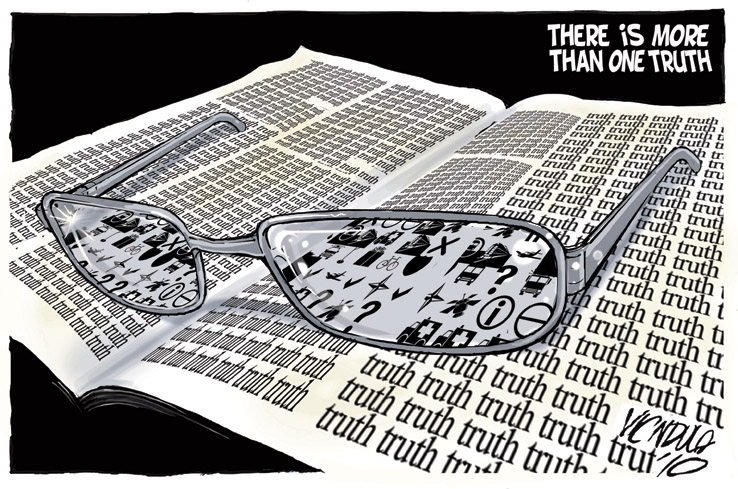 Living up to our motto, we think it's especially interesting to have the voices (and images) from those places that don't regularly appear in the global spotlight. Haiti is one of those places; its fifteen minutes of fame came on January 12, 2010, when a major earthquake struck the capital Port-au-Prince. Alas, the attention span of global media is chronically short, and soon other news was considered more more important. The camera's left, but the problems remained.

Inspired by his trip to Afghanistan, Matt came up with the idea to get comics  journalism from Haiti, made by Haitian journalists and artists, to show a global audience what it's like there, two years after the earthquake. The total lack of infrastructure meant that to find these journalists, we'd have to go there ourselves. To that end, I convinced the Dutch Ministry of Foreign Affairs to fund the project. After much preparation, we traveld to Haiti in Ayugust, and spent a month in and around Port-au-Prince to look for the right people. And with success. You can read about our experiences here. On January 12, 2012, we'll publish the first chapter of our comic on Haiti, focusing on the tent camps, corruption, and what happened to all the aid money.

December 15, 2010, also marked the beginning of our very first project that combined education with editorial cartoons. Working with 15 high schools throughout the Netherlands, we set up a collaboration between our 100+ cartoonists and over 300 students (age 15-18). Their goal; to come up with 100 great cartoons about the Millennium Development Goals and European Development Policy. Students sent in sketches and ideas, and cartoonists turned them into professional cartoons. The end result is a cartoon book that was made in large part by students, and is now used in Dutch high schools to teach about the MDG's and about the power of the visual message. 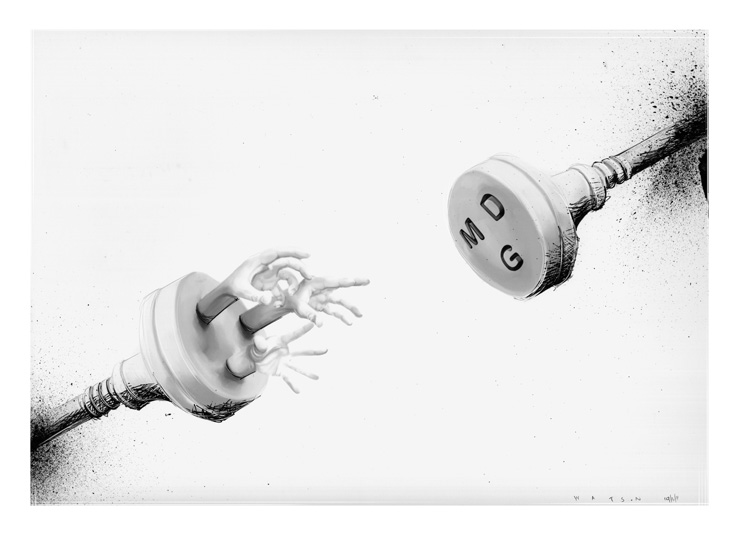 This is probably the first time ever such a cooperation took place, and we're certainly looking to do more of these projects. This month, Cartoon Movement gave a presentation about the value of cartoons in education at Online Educa, Europe's largest conference on e-learning, to share our ideas with educational organizations from all over the globe.

At the moment, we're branching out into the academic world with a long-running project for the London School of Economics, supporting  six-year research project on governance, security and justice in conflict-affected areas with editorial cartoons and comics journalism.

What makes Cartoon Movement unique is our global network, and our global scope. We aim to keep both the range of perspectives we offer, and the scope of subjects we tackle as broad as possible. Over the last 12 months our audience has grown steadily, and with visitors from 120 countries on average every day, we can also boast a truly international audience.

We're looking forward to continue on the same path in 2012, living up to our claim by continuing to publish high-quality content that offers a different perspective on what's happening in the world. We'll also continue looking for new ways to to use cartoons and comics to show the world the power of the visual message. For instance, in January we'll publish our second interactive comic, about the International Criminal Court (ICC).

We've been improving the website throughout 2011, and will continue to do so in 2012. If you have good ideas for Cartoon Movement, such as ways to improve the platform, or ideas for cartoon or comic projects, we would love to hear from you.

We hope you have enjoyed the first year of Cartoon Movement and will continue to visit and support us in 2012!

Cartoon as a tool of journalism can capture a situation in a most optimum way. The cartoon movement will grow tremendously.