Today we publish our third installment of 'Occupy Sketchbook' with a look at two more cities in the States. SI Rosenbaum takes us to Boston as the cold sets in on the camp, and regular contributor Dan Carino gives us some amusing images from Occupy LA.

Next week we will publish our final installment, an international edition, with sketches from London, Athens, and Amsterdam. 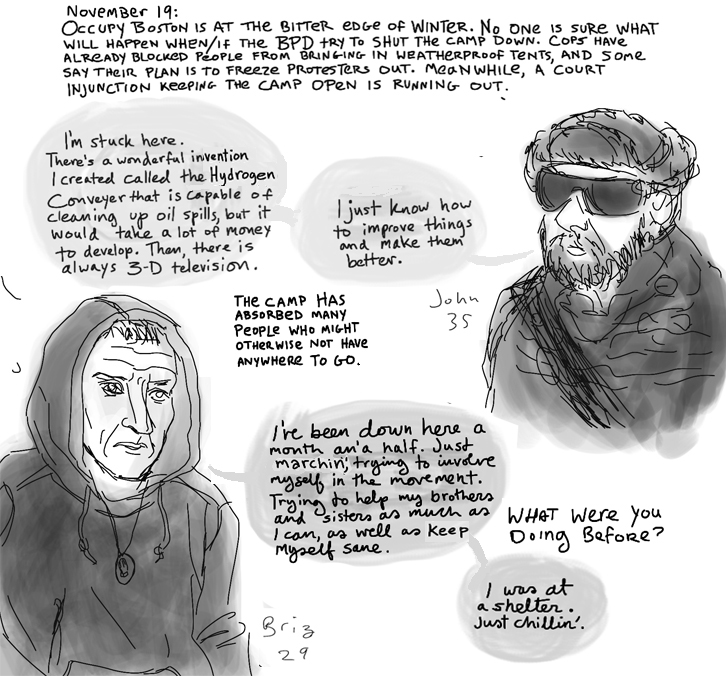 In this new feature we explore how cartoons are made, and give you an insight in how our artists work. First up are Richard and Slavomir Svitalsky, two brothers from the Czech Republic.

About their work method: although the very first sketch is done by hand, the rest of the work is done entirely on the computer, using a Wacom tablet (Intuos 4 Large) and graphic software (Coral Painter X and Photoshop CS3). 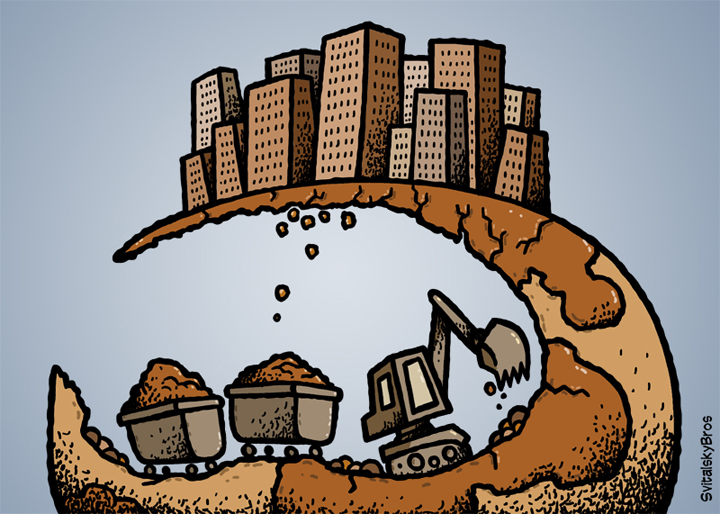 Richard talks about the advantages of working digitally: 'I use lots of layers. For every important detail I use a new layer. It gives me the opportunity to make changes at any time.' You can see the process step-by-step in the slideshow below: 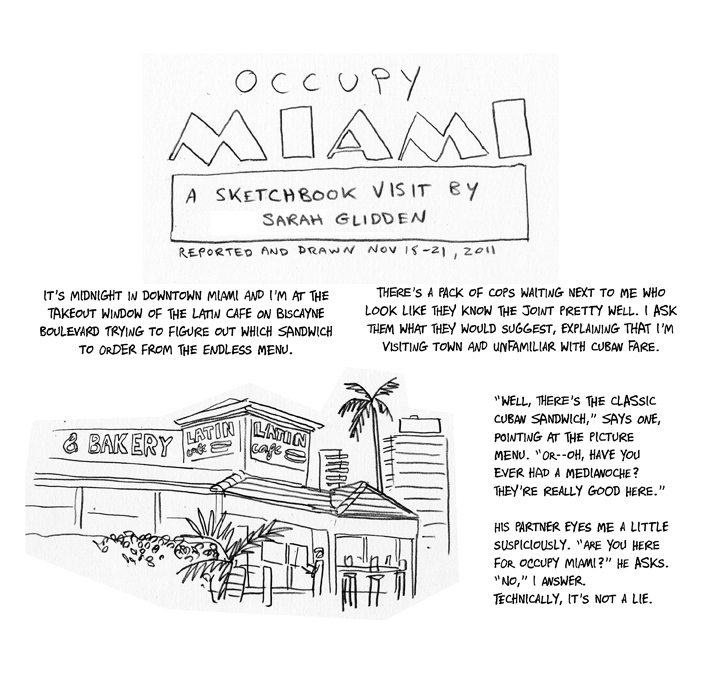 Susie Cagle is one of our contributors and a comic journalist who is pushing the medium to the forefront in America. It's not always an easy process.

While covering Occupy Oakland full time, she has been tear gassed and arrested. But when the Associate Press released a list of journalists arrested ot Occupy protests, they didn't include her name. It's not hard to imagine why.

On her blog, Cagle writes about the process of being laid off as a words journalist and getting her career going again through comics--and the confusion that has resulted.

After nearly a year producing drawn reportage outside of the “comics” sphere and in the regular news and feature sections of newspapers, magazines and websites, I was frustrated with the lack of respect given to visual journalism.

Even as all of media seems to be creaming their pants over infographics, few are making the connection between images and information.

Also of note is a recent article by Michael Cavna at The Washington Post's Comic Riffs blog. Cavna contrasts the approaches to Occupy by Cagle with Nate Beeler, a conservative editorial cartoonist without much love for the movement.

We are delighted to welcome another female cartoonist to our community. Sofia Mamalinga is lives in Athens and works as a freelancer cartoonist and graphic designer in the field of publications and advertising. She studied Fine Arts and Design at the Technological Educational Institute of Athens. You can see her first pitches in the newsroom here, and her website here.

The Washinton Post Comic Riffs blog has some coverage of our Occupy comics:

IN THE THICK OF THE OCCUPY MOVEMENT, Matt Bors sees an opening for comics journalists.

“News outlets are beginning to realize that comics journalism is a serious form of reporting,” Bors tells Comic Riffs, “and it’s particularly helpful with a movement like Occupy.”

As a syndicated editorial cartoonist, Bors has been on the scene at Occupy Portland, recording and occasionally tweeting the city’s protest play-by-play. And as the comics journalism editor at the site Cartoon Movement, he has been coordinating the cartoon contributions of such visual journalists as Stephanie McMillan (DC and elsewhere), Shannon Wheeler (New York), Sharon Rozensweig (Chicago) and Susie Cagle (Oakland) — who have drawn from the encampments amid skirmishes and, sometimes, official evictions. [Keep reading]

Over the last two months, the Occupy movement has captured worldwide attention. Cartoonists have been on the scene sketching, reporting, and participating. So we asked some of our contributors to share their drawings. Susie Cagle, Sharon Rosenzweig, and Shannon Wheeler bring us sketches from Oakland, Chicago, and New York respectively. We'll have another batch from different cities next week. 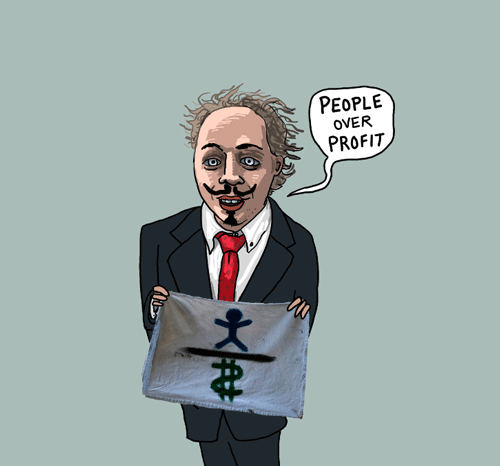 Every time a political cartoon gets a tremendous response, be it praise or death threats, editorial cartoonists feel vindicated about the inherent power of their medium, which is sometimes trivialized or ignored in favor of more "serious" commentary. With the latest controversy over cartoons in Charlie Hebdo in mind, Victor Navasky's column in the Sunday Times, "Why Are Political Cartoons So Incendiary?", explores the power of images to incite.

Neuroscientists and Freudians all have their explanations as to why and under what circumstances people — be they Muslim workers, French tyrants or members of an international court — find this “silly,” “trivial” and “irrelevant” medium so threatening.  I have long had a theory that one reason people become so agitated by cartoons is that there is no way of answering back. A caricature is by definition an exaggeration, a distortion, unfair. If you don’t like an editorial you can write a letter to the editor, but there is no such thing as a cartoon to the editor.

The Beginning of the American Fall

Protesting used to mean marching through the streets for a few hours and calling it a day. But new challenges call for new tactics. From Tahrir Square to Zucotti Park, the permanent protest is now the preferred model.

Cartoon Movement contributor Stephanie McMillan traveled from Florida to Washington DC last month for "Stop The Machine"--a permanent protest in the mold of the Occupy camps that have swept the United States. McMillan brings us her experience being one the of thousands of Americans now camping and organizing across the country in "The Beginning Of The American Fall." 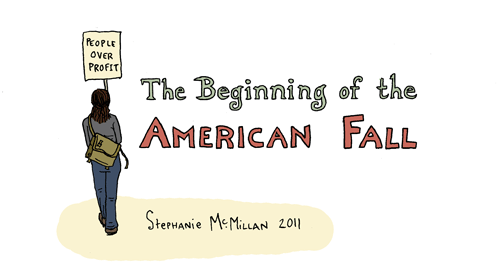 We'll be running the second part of McMillan's report in a few weeks. This Wednesday we will publish the first installment of Occupy Sketchbook, a collection of sketches from Occupy events all over the US. 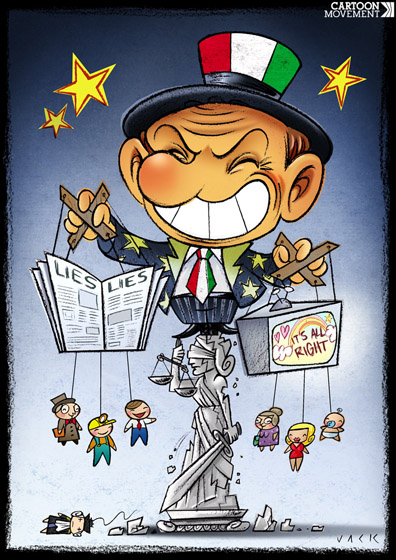 The fall of Silvio Berlusconi in Italy has been a slow train wreck--and he's been one of our contributors' favorite targets. Come see our slide show!