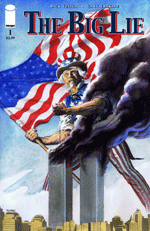 If you want to find your particular version of events surrounding 9/11 in comic format, you have a lot of options these days. The government's official line, The 9/11 Commission Report, was adapted into the graphic novel format all the kids are talking about. A recent 9/11 coloring book allows you bring to life an image of a SEAL operative shooting Bin Laden as he grabs his niqab-covered wife to catch the bullet--an early report proven to be false. "This is history. It is absolutely factual,"  says the publisher.

Rick Veitch adds his own version of facts to this growing pile with The Big Lie, a comic in the Truther mold. A longtime luminary in American comics, Veitch is responsible for acclaimed runs on Swamp Thing and scathing superhero satires like Brat Pack. Here, what he intends as an engaging way to address serious questions turns out to be unintentionally funny--if I didn't know better I'd be tempted to say it's a parody of moralizing, over-the-top Jack Chick comics.

The plot is as follows: A scientist travels back in time ten years to save her husband, who works in the towers and died on 9/11. Arriving on the morning of the attacks due to a miscalculation, and armed with her iPad ("your what?") full of data, she must convince her husband and his coworkers that a massive attack is about to destroy the buildings. No sweat, right? Well, her histrionic approach to explaining things doesn't win her any new friends.

If getting your loved one out of the building in 30 minutes flat is your only goal, it may be easier to concoct another plan rather than attempt to convince them you are from the future and a grand conspiracy is about to unfold. But these are comics, after all, and this is merely a set up to give the author a chance to expound on the many perceived holes in the 9/11 story.

Ten years out from the attacks, we aren't getting any closer to the truth.

Many Americans don't even remember the year 9/11 occurred. Around the world, polls show that in most countries bare majorities believe Al Qaeda carried out the attacks. In the Arab world the numbers hit rock bottom, while conspiracies about Israel's involvement soar. Veitch doesn't propose a single cohesive theory as to what happened, opting to throw out various suspicions--war games being played that day, the Neo-con agenda, possible foreknowledge had by Bush--to suggest that something was up. 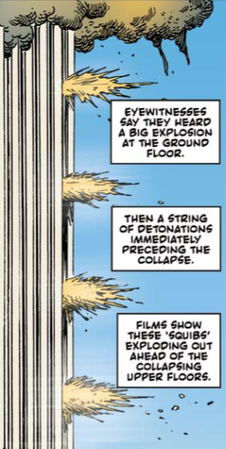 The most popular theory, and one Veitch focuses on the most, is that the buildings were part of a controlled demolition. "This looks exactly like every controlled demolition I've ever witnessed," exclaims the doomed husband watching a video of Building Seven's collapse on the iPad from the future. Indeed, the building collapses do look like other building collapses in that they involve massive structures crumbling earthward.  How radically different an unplanned collapse should look to the untrained eye is unclear, given the limited number of comparative studies done with giant buildings brought down by airplanes.

Building demolition is a months-long process whereby large teams eviscerate buildings, knock out walls, saw steel beams, and string thousands of yards of cable to connect hundreds of charges. It tends to be loud. An explanation for how this took place in a building with thousands of employees is never  given by Truthers, but they don't have to. They are just asking questions, they say.

The demolition scenario is implausible, but Veitch helps it along by visually misrepresenting a key claim. Explosive chargers called "squibs" are said to have detonated down the side of the building. Veitch draws them to look far more precise and fiery than they were in real life. (They were compressed air and dust--this and other theories were most expertly put down by Popular Mechanics magazine.)

It's not much of a spoiler to tell you the planes hit after the scientist is dragged out by security.

In an awkward touch, a black woman emerges from the blast, deliriously singing "Amazing Grace" while readying herself for heaven, and they realize the time-traveler had been right all along as they look up at the exposed thermite bombs rigged to a support beam. Like the end of Jack Chick tracts, those who refused the Truth are swallowed in the fiery death they deserve.

Uncle Sam, who introduces and closes out the tale like the Crypt Keeper of EC Comics, addresses the reader: "Lies are like unwashed socks. They come in all sizes and stink to high heaven."

You might say the same thing about conspiracy theories.

Matt, I've always admired your work, and so am especially pleased that you see through this 'truther' bullshit.

In a note of massive irony, check out the other Veitch... Charlie Veitch.

This is a real thing? How big of a conspiracy do people need? 20 sleeper agents infiltrate US flight schools for years, the group they belong to assassinates the Last Decent Guy in Afghanistan the day before, and they hijack four planes and successfully crash three of them into high value targets. Is this somehow _not enough_ for these people?

All the 9/11 dialouge in The Big Lie is backed up by an interactive citations page:
http://truthbetoldcomics.com/?page_id=469

Funny that people still use the thoroughly dismissed Popluar Mechanics articles for "debunking" the "truthers" because it was not Popular Mechanics thatissued the final official report: it was NIST.

It was also a high school physics teacher (also a so called "truther") that was able to force NIST into admitting that WTC 7 had no resistance at points during its "collapse."

Now the FBI is accusing the CIA of a cover-up, and former 9/11 Commissioners want a new investigation too.

The 9/11 families themselves are actively calling for a new investigation as well!It was them who pressured the Government to form the 9/11 Commission in the first place.
http://rememberbuilding7.org/10/

Truthers and much of what may be called, for lack of a better term, mainstream viewpoints (eg, Rudy Giuliani, GW Bush), agree on one essential point: the 9/11 attacks can not possibly linked to a reaction in any form to US foreign policy.

For the Truthers just as the "mainstreamers", it is imperative to deny any attempt to make sense of 9/11 in relation to Al Qaeda's stated desire to retaliate against the US for our government's actions. Item: Quote from GW Bush, "America was targeted for attack because we're the brightest beacon for freedom and opportunity in the world." Item: Jeremiah Wright was ditched by Obama, less for nutty radicalism than claiming 9/11 demonstrated, "America's chickens are coming home to roost." Item: Recall Ron Paul's assertion in a 2008 GOP debate that Al Qaeda was motivated by opposition to US foreign policy and Rudy Giuliani's blank amazement. Giuliani had never heard such a thing. Item: Note the general disregard of Mike Sheuer's insightful commentary on Islamic radicalism.

I am in measure attempting to justify 9/11. I do not endorse mass-murder of Americans. I do however think the killers believed they had a particular cause & it was not an aimless dislike of tall buildings, Americans or non-Muslims. It was a hatred of US intervention & power projection in the Mid East & a willingness to kill & die for that cause. But try telling that to Truthers, or Republicans.

Great review Matt. I must say the story is far more compelling than anything I would have expected from a 9/11 truther comic (although time travel is a terribly overused deus ex machina). That said, it is just a "story." Blade Runner and Minority Report were great stories too, but anyone who'd argue they reflect reality should have their sanity questioned.