Why are there so few female political cartoonists? I’ve been asked that question many times over the years. It’s OK, I don’t mind. We’re something of a rare breed. Exact statistics are difficult to find—even the national group Association of American Editorial Cartoonists can only estimate the national number of political cartoonists, let alone break them down by gender, ethnicity, or class. But to give you a rough idea, of the association’s 185 current regular members, only 15 are women. I’m one of them. 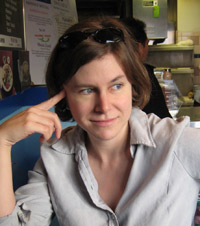 My short (and admittedly Zen-like) explanation is that there are so few female political cartoonists largely because there are so few female political cartoonists. Drawing cartoons and comics has traditionally been a guy thing—a somewhat nerdy guy thing, but a guy thing nonetheless. Without role models who look like you, or friends with similar interests, any activity becomes less inviting. It might not even cross your mind as a possibility.

But when did political cartooning first become the province of dudes? Patriot dude Ben Franklin is widely credited with the first American political cartoon: The famous “Join or Die” drawing of the chopped-up snake representing the 13 original colonies. In the 1870s, a dude named Thomas Nast became the first major editorial page cartoonist, followed by 20th-century dudely doodlers such as Bill Mauldin and Herbert “Herblock” Block. In 1915, Edwina Dumm became the first American non-dude to work full-time as an editorial cartoonist, a remarkable feat considering women didn’t win the right to vote until 1920. Given that women were deemed irrational, not expected to hold intellectual jobs, and certainly not supposed to have political opinions, the skewed demographics of the profession don’t seem all that mysterious.

A more contemporary problem comes in the form of profitable and supposedly progressive web publications like The Huffington Post that make it a policy not to pay for content. This business model presumes contributors have other sources of income; paying in “exposure” instead. If this setup becomes the industry standard, those without ample resources, especially women and minorities, will simply not be able to afford to survive as political cartoonists.

The challenges faced by female cartoonists parallel those of female op-ed writers. Washington Post columnist Ruth Marcus recently suggested that the dearth of female op-ed writers in newspapers is largely due to the imposition of “our own glass ceiling” as opposed to editors’ sexism. Women need to show more chutzpah, she argues. We must close the “cockiness gap” between ourselves and the great hordes of brashly bloviating males.

As Katha Pollitt has rightly noted, however, there’s an abundance of highly qualified and willing female writers whose numbers are not reflected on the commentary pages of major newspapers. The op-ed pages of the Post feature two women and 23 men, despite the fact that plenty of women write about politics and current events. Clearly, forces beyond “our own glass ceilings” are at work. In the case of political cartoonists, however, there aren’t quite so many women waiting in the wings.

This is not to cut Marcus any slack. Her argument fails to address the often subtle ways in which gender inequality works. If there is a cockiness gap, it might have something to do with ye olde double standard that ambitious women are perceived as you-know-whats. To be fair, Marcus does facetiously refer to “a certain unbecoming arrogance” required of outspoken women, but she paradoxically blames women for not displaying it.

Media coverage of cartoonists works the same way. The Columbia Journalism Review recently interviewed political cartoonists and editors about their opinion of the controversial New Yorker cover; they spoke with nine men and zero women.

So how did I buck the trend? It’s hard to say. I do know I recognized the unfairness of gender roles from a very early age, even though nobody slipped a copy of The Feminine Mystique into my playpen. My parents did indulge my tomboyish tendencies, though, buying me reams of comics and copies of MAD Magazine. As teachers, they also valued education and creativity, and were fully supportive of my round-the-clock cartooning habit. There wasn’t much else to do where we lived; as far as I was concerned, drawing comics was how I entertained myself.

While in college in the mid-1990s, I was invited to submit to an all-female comic anthology called Action Girl. This was my professional debut. Thanks in part to Action Girl, I was motivated to publish my own comic book after graduating. The result: Slowpoke Comix #1, a collection of short stories that were precursors to my weekly strip. One marked the debut of my character Drooly Julie, a randy femme with a penchant for stubbly metalheads. It was only after the 2000 election that my work took a sharp political turn, as did that of many other cartoonists. As I crossed this threshold, I wasn’t thinking much about breaking gender barriers. I was just freaked out by the country’s sudden takeover by wackadoos.

Over the years, my work appeared in more and more places, often alternative newsweeklies. These papers tended to be more progressive-minded than mainstream media, and I never got the sense that I was going up against a wall of chauvinism. I do get the sense, however, that some progressive publications don’t try as hard as they could to diversify their mastheads. As Women In Media and News founder Jennifer Pozner puts it, one of the biggest obstacles appears to be time: It can take longer and require more effort to look beyond the familiar or entrenched stables of male cartoonists and editorial writers.

Despite these occasional frustrations, the past decade suggests that the situation is improving. If my favorite comic convention, the Small Press Expo in Maryland, is any indication, there are more women than ever on both sides of the exhibitor tables. To invoke the flip side of my Zen koan: The more female cartoonists there are, the more there will be.

Jen Sorensen draws the weekly cartoon Slowpoke. Her most recent collection is Slowpoke: One Nation, Oh My God!

This piece has been reprinted from Campus Progress.

hi my name is Stanley and I wanted to ask if you let any other Artist do be a Cartoonist.I was asking because I would like to get Published