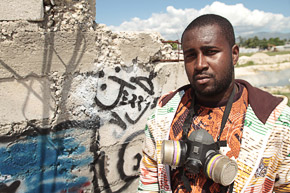 If you've ever been to Port-au-Prince, you will probably have noticed the painted murals that grace various walls and buildings throughout the city. Crammed in between stretches of wall dedicated to Digicel (the omnipresent telecom company) and political messages sprayed haphazardly on various surfaces (guerrilla campaigning often paid for by politicians), these big mural paintings stand out because of their quality and their message.

They are created by graffiti artist Jerry Rosembert (artist name just 'Jerry'). Like his well-known fellow artist Banksy, Jerry uses public space to spread a message about the problems of society. While we were in Haiti, we met up with him at Hotel Oloffson for an informal talk about his work, his vision, and his ambitions.

What stands out in Jerry's work is that is predominantly positive. Where Banksy is an outspoken critic of war, corruption, greed and pollution, Jerry has adopted a more positive message. Many of his murals show the love for Haiti and the Haitian people. The reason for this, he says, is that, amid all the problems that face Haiti, he wants to offer the people a message of hope. In a country that has a history of violent politics, Jerry is reluctant to let politics enter his work. Rather, he tries to create beautiful paintings that will remind all Haitians, both rich and poor, that they share the same country, and with it, the same problems. According to Jerry, the only way to let the country move forward is to unite all Haitians to work towards a common goal. No easy feat in a country where the divide between rich and poor is truly enormous.

Although we could understand his reasoning, we (being editorial cartoonists) do feel Jerry's work could use a dose of social criticism. In Port-au-Prince there are as many empty walls as there are problems worth drawing about. Although he believes making beautiful murals means his work lasts longer (some of his more critical pieces have been painted over), and will thus have more of an impact, he is planning to do more critical work in the future, focusing on the tent camps, the lack of education and the problems of rebuilding.

At the moment, Jerry is the only graffiti artist doing 'editorial' murals of this kind. The main reason: it's dangerous. Jerry says that the Haitian police force has a shoot-first-ask-questions-later policy that effectively deters people from taking up brush and spray can. Jerry makes most of his work at night, using the headlights of his car to provide the light to work (street lights are very scarce in Port-au-Prince). For his next project(s), he not only wants to make work that's more critical, but also work that is bigger. In order to do this safely, he plans to obtain permission for the surfaces he will paint on, and also inform the police beforehand.

Jerry's work is widely known, but Jerry himself tries to stay out of the public limelight. In two years time, he says, he might make himself known to the public. In the meantime, he prefers to visit the site of his murals on the morning after he made it, gauging the response of the public to his work  incognito. He may not be known by most Haitians, he is known in the NGO community, and he makes most of his his income by painting murals in camps, at schools and community centers. One of his next gigs? Doing a mural for Digicel...