The first part of the Haiti project (the trip itself) ended last week, and the traveling party has returned safely to San Francisco, Portland and Amsterdam respectively. So what's next?

Well, we have some cool things lined up, although some patience will be required. The second week of January 2012 marks the two-year anniversary of the earthquake that devastated Port-au-Prince, and we will have an entire week of cartoons, comics and videos related to Haiti at Cartoon Movement to mark the occasion. On January 12, we will publish the first chapter of the 75-page comic about life in Haiti that will be written and drawn in the coming months. 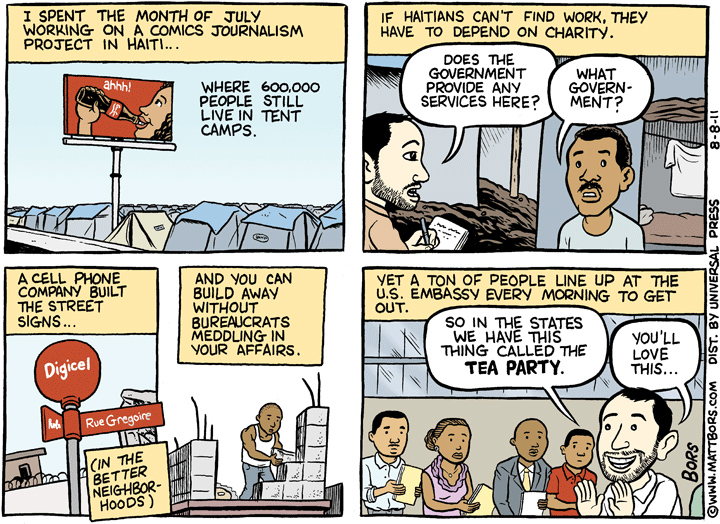 The comic will be divided in four chapters, each about 15 to 20 pages, which we will publish in monthly installments. The whole comic will be drawn by Chevelin Pierre, and three chapters will be written by journalists (Pharres Jerome, Robenson Geffrard and Roberson Alphonse). These three journalists all work as investigative reporters for the only major daily Haitian newspaper, Le Nouvelliste. Subjects they will investigate include the tent camps, the role of NGOs and aid money, and the structural problems of Haitian politics. The fourth chapter is a little different. It will be written by a Haitian writer, Dominique Batraville. Tentatively titled 'Aftershocks', this chapter will  deal with the aftermath of the earthquake for the Haitian people in a more personal way.

Alongside the comic, we will also be publishing the videos we worked on while in Haiti. These include a 'making of', in which the efforts that went into making this project happen are chronicled, and a portrait of Haitian cartoonists. A third video that is in the works is about the media landscape in Haiti. 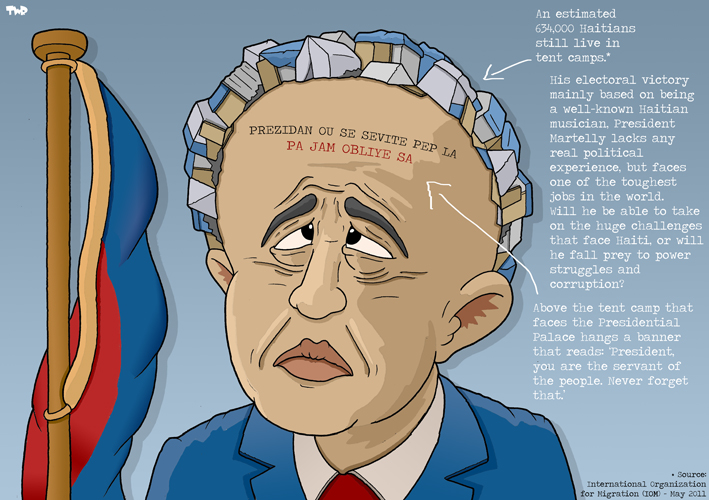 Additionally, Matt and Caroline are working a a joint video/comic project about the plight of the gay community in Haiti, which promises to be pretty cool.  Matt will also be working on a longer comics journalism piece on his experiences, set to run in January as well.

As an added bonus, we hope to get Philippe Dodard to do one of his amazing full-page cartoons about the current situation in Haiti. We also plan to have all the other Haitian cartoonists do cartoons about Haitian issues to be published during our Haiti-week.

All in all, looks like Cartoon Movement will be off to a great start in 2012. This is the first time ever that a project of this kind has been done. With the end result, 75 pages of comic journalism drawn and written by Haitians, we hope te set a precedent. We want to see more of these projects (and hopefully be involved), not only because we believe in the power of comics journalism, but also because doing it this way gives a voice to the people actually living there, instead of having Western reporters interpret these voices.

Great blog love all the pictures and posts! Thank you for sharing!

The spark that caused the riot was the shooting of a black by police, but the riot that ensued appears to have been dominated by looters (many of them white) hoping to get away with their loot in the confusion of a riot. They seem not to have reckoned with England’s extraordinary network of surveillance cameras, or with the anger of the people (including the Pakistani storekeepers victimized by the looters), which has resulted in many arrests and the swift imposition of substantial prison sentences on the looters and now a movement to evict looters and their families from publicly subsidized housing. The evicted may be more prone to engage in criminal activity, but the hope is that the threat of eviction, and of collective punishment (family members along with the malefactor), will deter more riotous behavior than it encourages.

let's join our hands together to stop this kind of wrong doings. It may risk lives in the future if we just let them continue.