Ten years into America's two major military campaigns in the Muslim world, Improvised Explosive Devices–IEDs–have become the weapon of choice for insurgents attacking American soldiers in Iraq and Afghanistan. Powerful, homemade explosives targeted at vehicles, IEDs have been credited with killing at least 1,500 Americans in Afghanistan since 2002. Many thousands of others have been left limbless and countless more have received traumatic brain injuries that will be with them for the rest of their lives. 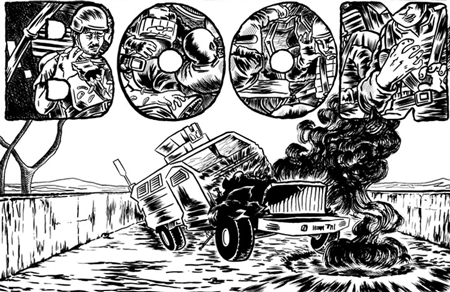 Wednesday, July 20, we will publish "Boom!" by David Axe and Ryan Alexander-Tanner, a first hand account of an IED attack Axe was in while embedded with the US Military in Afghanistan earlier this year.

Axe and Alexander-Tanner are collaborating on another comics journalism project with co-writer Corey Hutchins. "The Accidental Candidate" will be a 100 page study of Alvin Greene, the eccentric unemployed Army veteran who unexpectedly won the Democratic nomination for South Carolina's Senate seat despite never campaigning. They have launched a Kickstarter campaign to raise $1,000 to get started.

In the pitch, Axe writes, "On one hand, he’s proof that there’s a place for the 'everyman' at the center of political power in the free world. On the other, his win is evidence of the mass apathy, confusion and ignorance coursing through the American electorate... His is a cautionary tale, and a diagnosis of a sick political system." They have $200 to go in the next five days, so go donate.