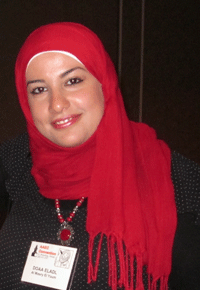 Doaa Eladl is the most visible female cartoonist in Egypt. Drawing for the daily newspaper Al-Masry Al-Youm, she works alongside four male cartoonists. Freed from the censorship of the past, she's become a strong voice in a post-revolutionary country.

I met Doaa at the end of a three week visit to the U.S., sponsored by the State Department, where she traveled with a group of Middle Eastern cartoonists as the only woman. We first met in Portland, then a few days later in St. Petersburg, Florida, where the annual AAEC convention was held. I interviewed her on Saturday, July 9 , the day before she was set to return home. We spoke through an interpreter.

Matt Bors: When we met  in Portland, you mentioned that during the revolution the presses were stopped, so you went out in the streets and distributed your cartoons by hand. Can you retell that story?

Doaa Eladl: I didn't do anything extraordinary during the revolution. I was just like any other Egyptian citizen: I went and protested. Some of them lost an eye or had other injuries. I am always encouraging people to go and demonstrate and protest in the streets so on the 25th of January I thought it was time for me to participate in the revolution. However, I didn't do any heroic acts. Some other people sacrificed a lot and lost their lives.

I drew some cartoons and took them, along with some that were drawn by my colleagues, and printed them out and distributed them in Tahrir Square. Most of the Egyptian people couldn't see them because at that time they didn't allow us to print or publish anything and the internet was shut down. I have another colleague, a journalist, they went to the square to shoot video clips about what was happening and they had their legs broken. So I think they are more heroic than me.

Bors: Yeah, well, I was just gonna say that even though you may not think what you did was heroic, that we were all watching and everybody thought that Egyptians were very brave.

Bors: The revolution is still going on, really. Egyptians are still occupying Tahrir Square to pressure the interim government to implement their demands. What are the changes you would like to see come from this? I'm thinking specifically of media reforms. 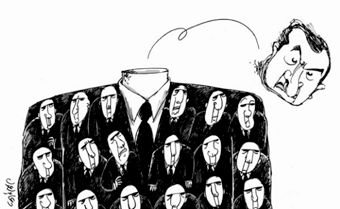 Eladl: I don’t think the change has reached the media yet since some media outlets still serve the cronies of the previous government, especially Al Muher Channel, which was owned by a member of National Party, the ex-government party. Some people are really furious over the actions of this channel because it instigates people–they are not representing the real goals of the revolution.

Bors: You mentioned to me before, under Mubarak, you could not draw him, or you would draw only an authority figure to represent the president, not Mubarak specifically.

Eladl: We had been informed there was a red line and we should not cross it. I did a few, limited illustrations of Mubarak. We would criticize Mubarak by using symbols, like a crown, and he would be wearing a crown and dressed like a king.

Bors: Did your editors ever lean on you to change something before it was published or cancel a cartoon?

Bors: You do 5 cartoons a week for a newspaper. Do you go into the office or do you work from home?

Eladl: When I started, it was a mess to do all the work from the office, but after that they started to understand that cartooning is a different kind of profession. We can do the work from other places and now I usually send it by email.

Bors: There were numerous cartoonists working for state newspapers who supported Mubarak, no? Are they still around?

Eladl: They changed and are now pro-revolution. They are like Transformers from the movie. They are trying to be part of the wave, but the Egyptian people are smart and understand what they are up to.

Bors: One of our Egyptian cartoonists, Sherif Arafa, brought an amusing issue to my attention with one of his cartoons portraying Colonel Sanders of KFC as a Ché revolutionary. Mubarak said KFC was handing out free meals to get people to protest? Apparently since they are an American company the idea was they were working with the CIA or something?

Eladl: Yes, and Israel. I never ate at KFC because I saw it as an American company and I didn't want to support it, but after Mubarak denounced it as helping the revolution, we all figured why not eat there?

Bors: This is your first time in the Unites States, and you leave tomorrow to head back home. What are your impressions of America and Americans from your last three weeks?

Eladl: During my presentation [to the AAEC], I tackled some topics that criticize Americans and I know there is a difference between the American people and the foreign policy, but what really frustrates me is the carelessness of Americans. They really don’t, you know, care about others outside the country. They don’t know what’s going on in the other parts of the world. They do not care about their countrymen who die on a daily basis in Iraq and Afghanistan. They didn’t learn from Vietnam. 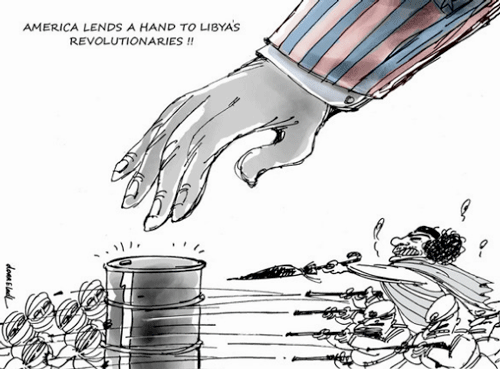 Bors: We're here at the AAEC convention in Florida. It's a low turnout this year, but probably the most editorial cartoonists you have ever met in one place. What is your impression of American editorial cartooning?

Eladl: I met two kinds of editorial cartoonists. Some of them, they deal with local and domestic issues and they never focus on U.S. foreign policy. One of them is Tom Toles, and I feel like he is not serving the people. And the others deal with international issues and understand the oppression and the suffering caused to other nations. One of them is Kal in The Economist. Really, I've started to change my mind and, you know what? I am going to be an international cartoonist. On the professional level, I was really impressed with Callahan's work--he talks about serious issues. I was so excited to meet such an iconic figure. The one lady, Jen [Sorensen], I felt like she deals more with international issues.

Bors: Yeah, Jen's good stuff. How many female editorial cartoonists would you say there are in Egypt?

Eladl: There are two others, but they are only starting out. I don't want to say they are professionals because they only started in this field last year.

Eladl: You could say that.

Bors: Well, there are not many more female editorial cartoonists in America. Maybe four.

Eladl: Actually, I was shocked to find this out because I thought there was only a limited number of female cartoonists in Egypt. But when I visited the United States I found the same issue--only four female editorial cartoonists! So now I've had to change my view. (laughter)

Bors: You know, there was talk in the AAEC board meeting about opening up membership to international cartoonists.

Eladl: This is really great. However, why did you think of it just now, why not before?

Bors: Actually, it's been discussed before but people had wanted to keep it closed to Americans. As time goes on, more people want to have it open to international cartoonists. Maybe because there are less and less cartoonists working in the states.

Eladl: I think that would be great. 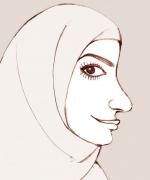 Bors: You've done a lot of work on the revolution, obviously. And you tend to focus on women's rights and free speech. What other issues are you drawn to?

Eladl: All the issues that concern Egyptian citizen. I deal a lot with women's issues, gender rights, but I think I focus a lot of my work on Egyptian citizens and, because I think any reform should start with the Egyptian citizen, trying to get them to participate in this process.

The purpose of editorial cartooning is to awaken people.  Some media outlets, whether in the United States or Egypt, distort the facts. And normally the media is controlled either by government, by investors, by the people who have the money. So cartoons, they should look into issues and make it clear whether it is black or white, or whether there is a grey area. People can look and distinguish between sincere and honest cartoonists and from other kinds that are not. Even an historian can be under pressure and to fake the writing of history. But cartoonists, we have the freedom to say what we want.