In Defense of Embedding

Two comic journalists, David Axe and Ted Rall, have both reported from Afghanistan multiple times–and in very different ways. Axe embeds with the military, while Rall travels on his own, studiously avoiding them. Cartoon Movement has published two opposing columns by the authors on the practice of embedded reporting. Rall's column was published Monday.

In a storm of dust and noise, the blue-painted helicopter belonging to an anonymous military contractor settled onto the playground-size landing zone of a U.S. Amy outpost in eastern Afghanistan, just a few miles from the border with Pakistan. I tumbled onto the loose gravel and, bowed under the weight of my backpack, body armor and cameras, lurched toward a beckoning sergeant. The Taliban had kept this outpost, just outside the town of Margah in eastern Paktika province, under steady rocket bombardment. We had to get under cover.

It was the first of 10 days that I, a reporter for Wired, C-SPAN and Voice of America, would spend living with the platoon of Army paratroopers occupying the Margah outpost. The troopers planned, trained, killed time, patrolled around the outpost and, twice during my stay, set out on long missions into the mountains, where they immediately came under attack. I was there for everything, cameras rolling, notepad quickly filling up, dodging bullets and rockets just like the soldiers did.

In quieter moments, the young paratroopers recalled an incident in October when as many as 300 Taliban attacked in the middle of the night, nearly overrunning the base. The Americans fought heroically -- and as luck would have it, all survived. When the sun rose, 92 dead Taliban littered the field. One kid named Timothy James held back tears as he described the experience. "I'm just glad to be alive," he said. His 19-year-old face was, for a moment, a perfect snapshot of the traumas of the decade-old Afghanistan war.

The reporting I did in my time in Margah was some of the best of my so-far seven-year career as a war correspondent. And it was work I could not have done without the support of the U.S. military. The Army provided all my transportation, lodging and protection in a remote, lethal environment. Technically, it was an "embed" -- an arrangement that some critics have characterized as reporters cozying up to the military, or the military "buying" favorable coverage.

But to me, the category is incidental, and the criticism often off-base. 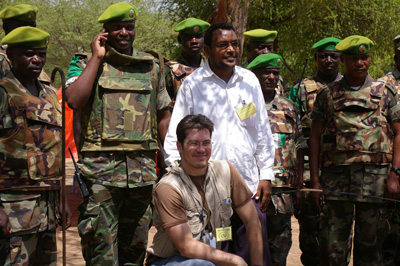 For one, embedding is not new. What we now call an "embed" is, in fact, an old way of reporting on war. Ernie Pyle did it in World War II; he even wore a uniform. In Vietnam, Larry Burrows shot some of the most moving, and important, images of the war while living and traveling with American troops. Both men hated war. Both died in combat. I've faced mortal danger on many occasions while embedded; living inside a military unit does not necessarily make a reporter safer.
Embedding is not unique to the U.S. military or even to full-scale war. I've worked in conflict zones across the world, from Somalia, to Congo and Iraq. The logistics of traveling to these countries can be daunting. My personal security is often tenuous. To make it work, I've sometimes accompanied organizations accustomed to and equipped for operating in difficult environments; often, these organizations are also my subjects.

In Somalia in 2007, I lived in a hotel but enjoyed security courtesy of some off-duty government soldiers (whom I paid) and patrolled with Ugandan peacekeepers. In Congo, I lived and traveled with the U.N. In Iraq, I was sometimes alone; other times, I tagged along with: British and U.S. diplomats; British, American, Dutch, Australian and Iraqi soldiers; Kurdish elders and members of their Peshmerga militia.

In every case, I made it clear that the organizations would not be permitted to censor my reporting. In only one case did anyone -- the British Army -- even attempt to do so, and they relented after I complained loudly. My stories have often been highly critical of the armies, agencies and nonprofit groups that helped facilitate my coverage. My reporting from Margah clearly reflected my personal conviction that James and the other Americans on the Afghanistan-Pakistan border are out-numbered, in serious danger and fighting an unnecessary war that they cannot win.

An embedded reporter is not automatically a propagandist. Now, critics of embedding might say that it's not necessary for an organization to practice outright censorship in order to influence the stories an embedded reporter produces. That's true: there are more subtle means of influence. Namely, a journalist might be reluctant to publish negative news about people he has grown to like on a personal level. But that kind of favoritism is not an exclusive product of embedding. Rather, it's the result of bad journalism -- and can happen whenever a reporter and his source spend more than 30 seconds talking to each other. That is to say, every time.

Honestly, the only valid criticism of embedded reporters also applies to those who never live inside an organization they are also writing about. Bad journalists produce bad journalism, regardless of the details of their access and logistics.

Moreover, I'm at a loss for how one might report on war from the perspective of the combatants, without accompanying the combatants. Granted, for Western reporters, that usually means traveling with U.S. and allied forces, though English-speaking reporters have succeeded in embedding with the Taliban and other "enemy" extremist groups -- albeit rarely, as these groups are usually more interested in killing reporters than showing them around.

Perhaps what the critics of embeds are really trying to say is that they want to read more reports about war that don't portray the conflict from the perspective of American soldiers. That's a perfectly valid point. But as long as Americans and their allies are fighting, someone needs to tell stories about these soldiers. To do that, you have to go where the soldiers are, get close and stay there long enough to understand them, their motives, their successes and their failures. If you want to call that an "embed," fine. But don't call it wrong. It's just journalism.

David Axe is a freelance war correspondent and a regular contributor to Wired, C-SPAN and Voice of America. He is the author of the graphic novel War Is Boring. David blogs at www.warisboring.com.

I agree that we need coverage from as many vantages as possible.

Rall asserted, Before joining "their" battalions, reporters sign contracts agreeing to subject their dispatches to military censorship. This is a particular criticism of the current U.S. practice of embedding. Did you have a different arrangement?

Sorry, I tried to use html quote tags and it didn't work. Let's try the old-fashioned way:

I agree that we need coverage from as many vantages as possible.

Rall asserted, "Before joining "their" battalions, reporters sign contracts agreeing to subject their dispatches to military censorship." This is a particular criticism of the current U.S. practice of embedding. Did you have a different arrangement?

When embedding, we sign contracts agreeing to two basic things:

1) Not to publish photos of dead or injured troops without the consent of those troops or their immediate kin. Sort of like a medical privacy policy.

2) Not to publish plans for troop movements in advance of an operation.

But the contract does not allow the military to screen or censor reporting. It only gives the military legal basis for barring future embeds if a reporter violates either of the two policies above.