Our third week in Haiti, and a lot to tell.

Yesterday we visited one of the biggest tent camps in Port-au-Prince. Sprawling on a hillside, the camp is so big that it's divided between two city parts, Delmas and Bourdon. Although the conditions people in the camp have to live in are far from ideal (and unimaginable for most of us from more fortunate parts in the world), the camp has seen a lot of improvement since its ad hoc creation right after the earthquake. Most of the tents are well-constructed, there is a market area for people to get their groceries, a sanitation area, solar powered street lighting and rubbish bins. There are broad roads throughout the camp, and canals lined with concrete-filled sandbags to channel the excess water out of the camp. A primary school and a church can be found on the premises.

These are all good things designed to make life better and easier for those Haitians forced to live in a camp. They are, however, also painful reminders of the permanency of the camps. With each new improvement, tent camp residents realize the camps are here to stay, indefinitely. Again, it's the lack of government that prevents a structural solution that would bring an end to the tent camps. According to the residents, there has never been any government official (no matter how low) in the camp to take a look at the situation. All of the improvements have been done by NGOs; these organizations do what they can to make life in the camps better, but it is not their task or mandate to provide a solution.

Life in the tent camps and their future will play a central role in the comic that we're lining up, and will most likely result in a number of cartoons by Matt and Tjeerd.

Highlight of the week was our visit to Philippe Dodard. Philippe is not only a renowned Haitian painter, he is also the godfather of Haitian editorial cartooning. He was the first cartoonist for Le Nouvelliste, starting there in the mid-1980s. He is most famous for his full-page cartoons that were published annually on the cover of Le Nouvelliste as a recap of the most important Haitian news of that year. Although he doesn't do political cartoons anymore, there's a good chance he'll come out of retirement to do one of his full-page cartoons for Cartoon Movement, which we will run in the week leading up to the publication of the first chapter of the comic on January 12, 2012. 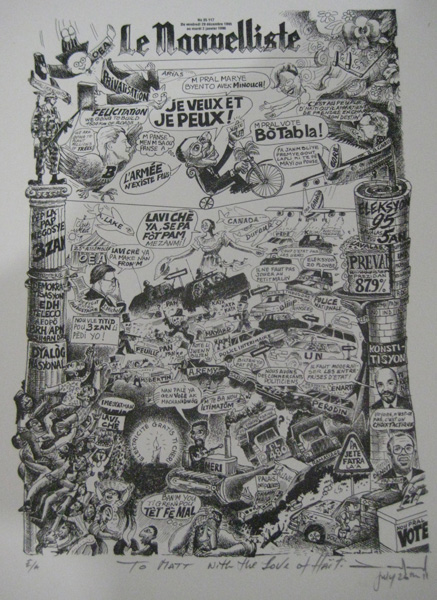 Another 'highlight' was a six-hour (!) visit by Martha Stewart and Macy's CEO Terry Lundgren to have a photo op with Haitian artisans, whose products are on sale at Macy's. The fact that they buy the products of a small group of Haitian artists is great, but you have to wonder how meaningful this is, given that their trip wasn't even long enough to have dinner in Haiti. According to their press release, the impact of what they do is huge. Apparently, there is a Creole saying 'Art feeds millions' (or so they say in the press release). We have yet to find a Haitian that's familiar with this proverb...and we've asked a few. 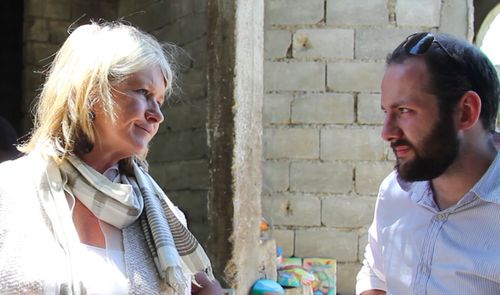 Cartoonists are known for their cynicism. It's hard for us to see a less-than-a-day visit by celebrities in a positive light. Another group we have trouble with regarding in a positive way are the missionaries which are plentiful in Haiti. They're mostly Americans, and often accompanied by groups of youngsters in search of a 'life-changing experience', here to convert the natives. 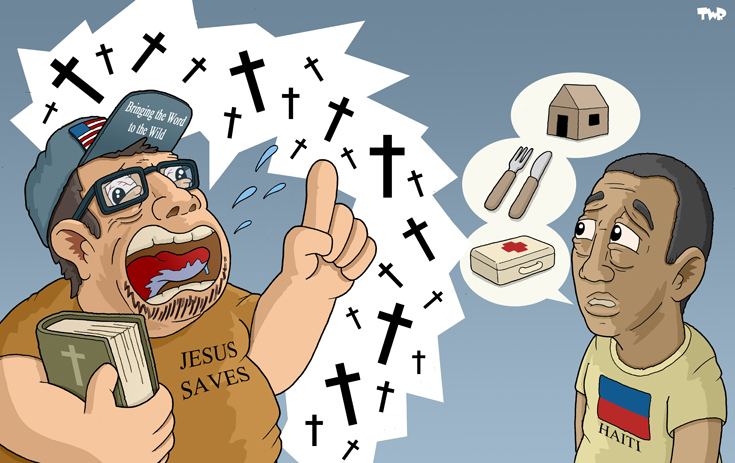 That's it for now. Only a few days left. Our final update will be on Monday or Tuesday, so stay tuned.

That's quite remarkable to how widespread the tents are. Must've been quite the effort to set them up. I love the photo by the way, vibrant colors for the cartoons. Keep on posting!