Although the headlines are dominated by the shooting in Norway, the drought in Africa and the debt of the United States (not to mention the death of Amy Winehouse), we still want to give an update from the country ranked number 5 on the 2011 Failed State Index.

We've now been here for a little over two weeks, and have one-and-a-half week left before we head back home. The impressions of misery and poverty are vividly present every day, but seeing past the squalor you can sometimes get a glimpse of something else. The lush tropical vegetation, the spirit of the Haitian people and the gaily painted buses and pick-ups that are used for public transport make you think that Haiti could be paradise. It's not. To quote a resident of one of the larger tent camps we visited,  it's 'hell on earth'.

The Catholic faith is a strong force in Haitian society, evident in the religious texts that decorate nearly every car and many walls. For non-believers it can be hard to comprehend that faith is sustained in the face of overwhelming misery without hope of reprieve, but it could be a sign of the resilience and strength of the people living here, and the need to keep hope alive. However, this faith has a dark side.

Many Catholic Haitians see the earthquake as a punishment from god, for all the sins that mankind commits. In practice, this means that the earth quake has been blamed on the people in Haiti that were perceived to be living in sin, namely the gay community. Last week we visited SEROvie, one of the few organizations for the lesbians, gays, bisexual and transgender people (LGBT) in Haiti.  Being gay in Haiti has never been easy, and the earthquake severely aggravated an already bad situation. Right after the quake, people started openly blaming gay people for the disaster, often with violence. Priests spurred the population on, in sermons given in church or on the radio. 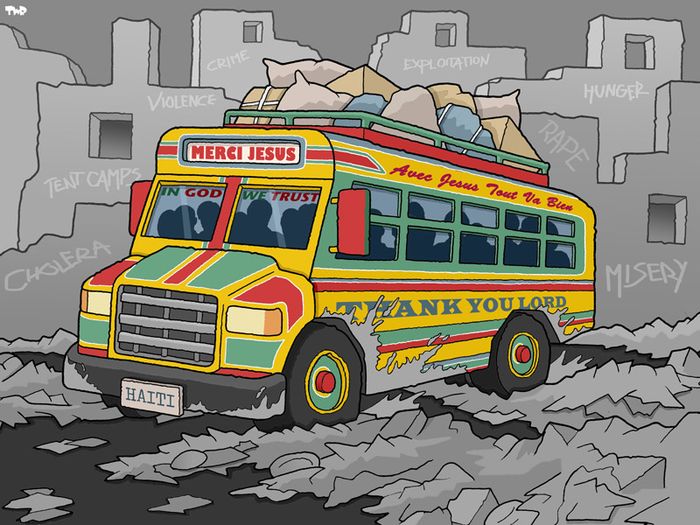 We are making good progress with our main project, producing Haitian comics journalism. We have officially hired Chevelin Pierre as the artist for the project. Chevelin is without a doubt the best comic artist working in Haiti today. The final comic will be 75 pages in color. The script will be written by Haitian journalists, who will use the next two months to delve into several issues that are at the heart of the many challenges that continue to face Haiti.

In the coming week we will talk to and interview yet more people, and have several meetings with the journalists to hash out exactly which subjects will be chosen to fill the 75 pages of Haitian comics journalism.