On Tuesday we met up with Haitian cartoonist Teddy Kesser Monbrun. Teddy (26) is well known in Haiti, as he has been doing cartoons for Le Nouvelliste (one of the two main newspapers of Haiti, together with Le Matin) for the last five years. His cartoons run on the top of the front page of the newspaper, giving him wide recognition with his audience. In Europe and the US, editors rarely allow editorial cartoons to grace the front page of a newpaper. We'll be doing a more extensive interview with Teddy later on this trip, as well a with the cartoonist who works for Le Matin, Jerry Boursiquot (pen name Bousiko). We're meeting with him tomorrow. 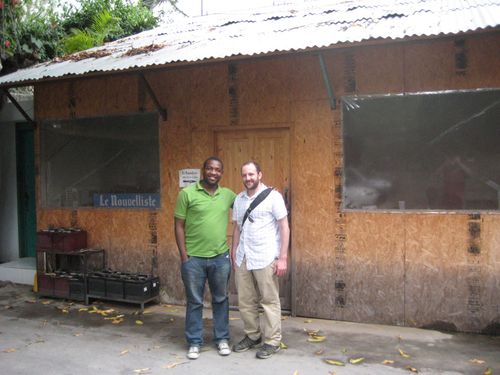 Today we got up early to meet Carel Pedre, a radio host and TV presenter (and Haitian celebrity, as we found out), to talk about the challenges facing Haiti today. In his view, the persistence of the tent cities is the major problem. Even though (albeit on a very limited scale) houses are being built people stay in the tent cities because here they have access to food and basic health care, provided by the multitude of NGOs acitve in Haiti. Almost all of the tent city dwellers are without jobs; moving out of the tent cities would mean leaving behind the basic necessities that keep them alive.

Carel Pedre in his radio studio 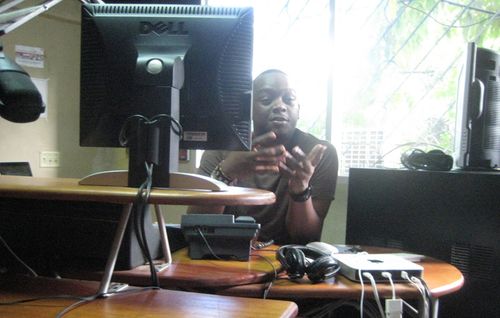 Among other things, Carel is the host of the Haitian version of American Idols, called Digicel Stars. Digicel is the local cell phone network, and it is omnipresent, with ads on walls, parasols, billboards and posters and any other place you can think of. In parts of the city, they've even put up street signs. In a country where the state does not have the means to provide even to most basic services, this is not entirely surprising. The billboards around the city (the ones that aren't taken by Digicel) are dominated by ads for water filtration systems and power generators. We wonder if this is what libertarians have in mind when they talk about minimum government, maximum freedom? 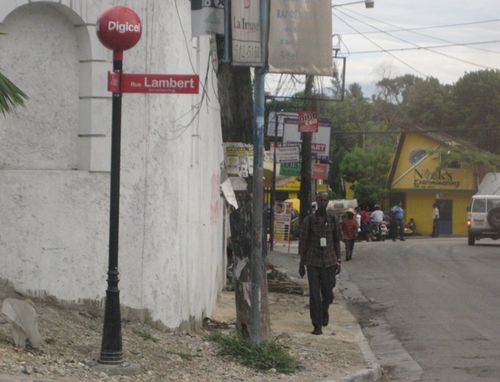 The second appointment on the schedule today was a meeting with a comic artist that would be very well suited for the project, Chevelin Pierre. Chevelin is one of the few Haitian cartoonists that is well versed in sequential comics. He works for a number of NGOs, and is probably best known for a full-page comic he does  for Chimen Lakay, a free paper published by Sitwayen Ayiti (Citizen Haiti). With a circulation of half a million copies, this is currently the best read publication in Haiti. Perhaps even more important than the number of copies, is that the paper (and comic) is published in Creole, instead of French. Although French is one of Haiti's official languages (together with Creole), many people are only fluent in Creole, and don't read French very well. The two newspapers Le Nouvelliste and Le Matin are published in French. 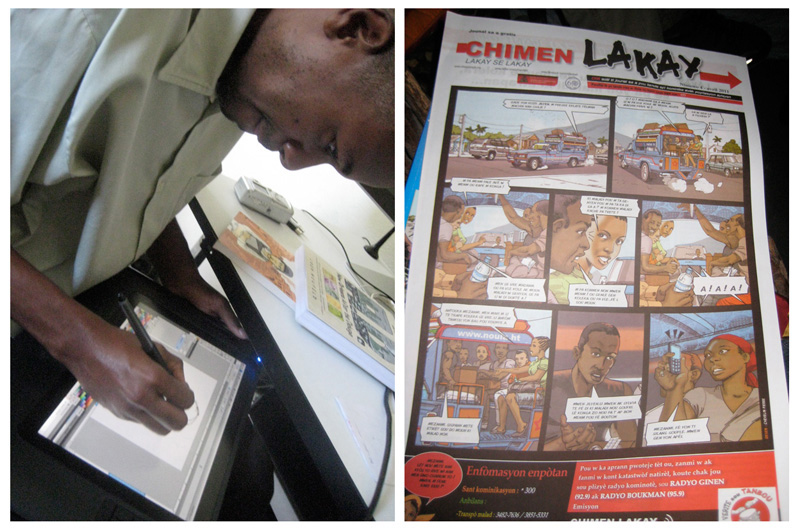 There's a good chance that part or all of the comic that will result from this trip will be drawn by Chevelin, as his style and the quality of his work meet our requirements. The next challenge will be to pair him up with one or more Haitian journalists who can do in-depth reporting and translate these to a comic script (with some of our help).

It's pretty lucky to find your webblog!Just one suggestion: It will be better and easier to follow if your blog can offer rrs subscription service.

He is a good friend that speaks well of us behind our backs.