Today Cartoon Movement publishes a groundbreaking work of comics journalism by Dan Archer. "The Nisoor Square Shootings" is a multimedia comic that allows readers to move through a real-life event, seeing things as they unfolded from multiple perspectives. 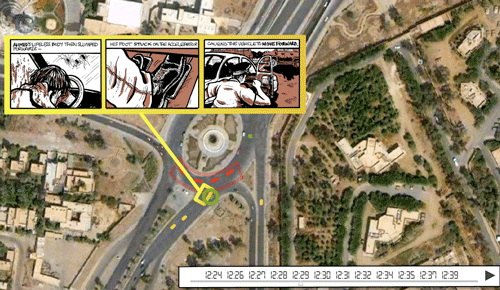 In September of 2007, employees of the military contractor Blackwater killed 17 Iraqi civilians in Nisoor Square, Baghdad, sparking international outrage. Charges against Blackwater were controversially dismissed and the incident drew attention to the role contractors play in the Iraq War more than any other. The case was reopened in April.

Based on eyewitness testimony, photo references, and numerous reports, Archer recreated the time line of the shooting, breaking down the chaotic events into an accessible multimedia comic that showcases the power and capability of graphic journalism on the web.