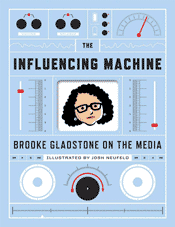 The Influencing Machine is more than graphic nonfiction. It's a media studies course in itself, distilling a solid chunk of what I and thousands like me studied in journalism school into about 150 pages of art, a book that is itself a lecture.

Of course it took a person like Brooke Gladstone, who breaks down the myths and mistakes of the media every week on NPR's On The Media, to make this book happen. Working with Josh Neufeld, the artist behind the heartbreaking A.D.: New Orleans After the Deluge, Gladstone's media manifesto provides valuable background critical for understanding the problems and possibilities in this particular moment in journalism.

The use of Brooke's image throughout the book, as a guide through both history and theory, works visually the same way her familiar voice works on the radio; as a comforting presence that adds  personality and allows perspective on recent events, while making the distant past come alive. There's humor aplenty—even a vintage dirty joke or two.

Particularly when it comes to complicated theory and research about media's effects, the comic format shines.  Susie Cagle's work with infographics has shown that comics are actually a great way to break down numbers, illustrate statistics, and generate interest in otherwise wonky subjects. That works here as well, particularly with the illustration of Daniel Hallin's “Spheres of Influence” using a donut.

But the comics format also allows Gladstone and Neufeld to insert the personalities of the theorists, putting a face to the largely thankless work of communications research and media criticism. It also, of course, allows them to pass subtle judgment, poking subtle fun at Jeff Jarvis's “full disclosure” on his blog by portraying him  in an X-Ray machine or putting Clay Shirky in the Lotus Position, the Buddha of the Internet.

Can illustration ever be “objective”? Well, Gladstone doesn't think objectivity is possible in the first place, and she tosses the very idea aside with this book, the very existence of which is a statement in favor of point of view and personality in reporting. And yet she makes a good case for the continuing need to verify facts, provide context, and not mislead news consumers—particularly with an illustration that adds perspective to the famous photos of Iraqis destroying a statue of Saddam Hussein. Many have probably heard the debunking of the myth behind that story, but the wide-angle view of the square provided here gives a more visceral feeling to that truth.

The tone of the book is largely upbeat, particularly on the ever-present question of whether new media technologies are changing our brains (constantly the subject of Op-Eds and speeches by people who make their money in older technology—like, er, books and comics, as well as radio).  But Gladstone and Neufeld do leave us with a few worries.  Particularly about the “photoshopification” of society, and the growing ease of faking photographs making photos themselves less trustworthy.

The next panel is a small but jolting rendering of that famous Abu Ghraib photo, of a hooded prisoner standing on a box with wires clipped to his fingers.

The book works this way many times—using a simple cartoon to call up the visual memory of something striking, poignant, or horrifying.  Often these are small, unadorned panels, the last one on the page, forcing you to pause and consider what those images really mean.

The introduction explains what Gladstone means by The Influencing Machine. It's a psychological phenomenon, documented throughout history, of paranoid patients convinced they're being controlled by a machine.  It's a great metaphor for the press, of course the biggest “influencing machine” of all.  The problem with it is that it falls by the wayside as the book wades into its material, returning at the end for the discussion of new technologies. The “influencing machines” of social media, after all, are being blamed for lack of attention span, credited with fomenting revolution, and of course, are currently in the process of screwing up another Congressman's career.

If the point here is that, as Gladstone quotes comic-book hero Spider-Man, “With great power comes great responsibility,” then the book does a wonderful job preparing the reader for that responsibility. Unfortunately, it then seems to imply that all we can do about the media is shrug our shoulders and watch it change—and watch it change our lives. “We get the media we deserve,” says comic-Gladstone, but do we? Who deserves it? Did the people of Iraq deserve the media of the U.S.?

I called The Influencing Machine Gladstone's media manifesto above. But can it truly be a manifesto with a conclusion that leaves the reader—even a passionate media junkie like me—wondering what we can do about all of this, or if there's anything we should do?  Perhaps “primer” is a better word, since the book is the best single volume you can find for a deep background in history, theory, and a decent analysis of the current moment.

But I'm not content simply with analysis. I want to know how to fix things.

Sarah Jaffe is a freelance writer and comic book nerd. She has a master's in journalism from Temple University, and you can find her work here and follow her on Twitter.