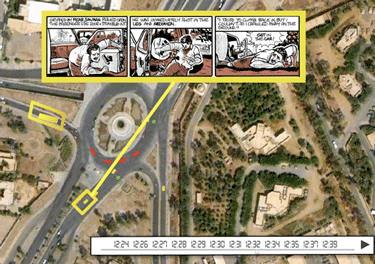 Next Wednesday we will publish a new piece of comics journalism by Dan Archer of the UK. It is an interactive time line about the Blackwater shootings in Nisoor Square, Baghdad in 2007, where 17 Iraqi civilians were killed. The comic takes our slogan 'there more than one truth' to the next level, by showing several different perspectives on the incident pieced together from news reports and eyewitness testimony.

A Knight Fellow at Stanford for the last year, Dan recently gave a short talk about how he incorporates comics and multi-media visuals into his work.