The Sorry State of Journalism

I've been thinking about whether to do this post or not for a couple of days now. I concluded that to me, the event I'm about to describe is a clear example of what is wrong in the field of journalism today, and therefore well worth writing about.

On Friday May 20th I received an e-mail from an editor at Trouw, a major Dutch daily newspaper. They were planning to run an article about the role of cartoons in the Middle East, and requested if they were allowed to run one or two cartoons by Egyptian cartoonist Sherif Arafa. Did we have those cartoons available in high resolution, and would it be all right to run them for free if the cartoonist/Cartoon Movement were credited? I sent back a polite e-mail explaining that we are a professional platform that pays cartoonists for their work, and also charges a fee for the republication of cartoons in other media. The answer was that there was no budget and they would use other images instead. 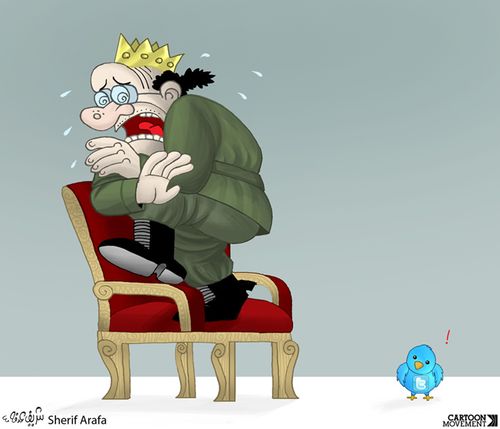 I was a bit disappointed with the lack of budget for cartoons at Trouw, but didn't give it much of a second thought, as this lack of budget unfortunately is all too familiar in dealing with media these days. Then, on Monday, someone sent me the article as it had appeared in Trouw. They hadn't printed our cartoons; instead, the article started out with a detailed description of the cartoon 'A Dictator's Worst Fear', explaining the cartoon as an example of how cartoonists from the Middle East cannot depict their leaders in cartoons. The article continued to talk about  the cartoon 'After Mubarak' which was published a week later (and two days after Mubarak's fall), and was the first depiction of Mubarak by Arafa. The article was interesting, but there was one thing missing (in addition to the cartoons). The author had neglected to make any mention of Cartoon Movement as the publication in/on which these cartoons had first appeared.

In reaction to our refusal to supply free cartoons, the editors at Trouw apparently decided to retaliate by leaving out our organization altogether.

My response was to write the following letter to the editor who first contacted me, as well as the editor-in-chief. I have yet to receive a response:

With some surprise I've read the article about the role of editorial cartoons in the Middle East in Trouw of Saturday, May 21. In the article, the cartoon by Sherif Arafa is described in detail, and even the publication date is mentioned, but the fact that the cartoon is published on Cartoon Movement is omitted. I can't help but feel that this omission is related to our refusal to supply Trouw with free cartoons.

The author of this article would probably be reluctant to work for nothing more than 'exposure', and the same applies to professional cartoonists. A daily national newspaper like Trouw surely knows that journalism costs money? Cartoon Movement is a platform for and by cartoonists, and its mission is twofold. First, we are a platform for cartoonists from all over the globe to share their perspectives, especially those perspectives that might not be appreciated in  the cartoonist's country of origin. Second, Cartoon Movement is trying to build a sustainable future for editorial cartooning, which means we pay all our cartoonists for the work they publish at Cartoon Movement. In this way, we provided bot the means and the platform for Sherif Arafa to publish his work about the Egyptian revolution.

Part of the funding that is needed to sustain Cartoon Movement comes from the republication of cartoons in newspapers and magazines. The fact that Trouw feels that cartoons are worth writing about, but does not have any budget to run them is regrettable, but it's almost characteristic of the current state of journalism. However, describing one of our cartoons in detail, but leaving out where it was published, seems very odd. It strikes me as a remarkable lack of consideration from one journalistic organization to another; this consideration can only be attained by supplying free material.

The point I'm trying to make is that the editorial cartoon will disappear if no one is willing to pay cartoonists to make them. The article in Trouw acknowledges the important role of cartoons, and calls them a gauge of public opinion. The Cartoon Movement is currently one of the few initiatives (if not the only one) that is committed to ensuring a future for editorial cartooning. At the very least, we are entitled to some respect.