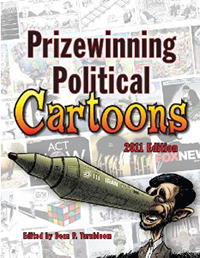 In the sometimes too-quick-to-react world of editorial cartooning, there is barely time for reflection as the next deadline looms.  As the 2010 prizes have all been handed out at this point, we can look back at who was doing notable work, who was given a nod for it, and who was overlooked, but most cartoonists are already charging toward next year's entry and today's deadline. Book collections offer an attempt to capture the fleeting glory of daily editorial cartoons and have been notoriously spotty and of dubious necessity for as long as anyone has been printing them. The two mainstays, Daryl Cagle's The Best Political Cartoons of the Year (Que) which is currently on hiatus, and The Best Editorial Cartoons of the Year (Pelican) edited by Charles Brooks have been nearly alone up to this point.

While both of those collections are thick and deliver a good dollar-to-cartoon ratio, they suffer from cluttered layout and redundant, sub-par material. Cagle's collection is grouped by major news stories of the year, which often means numerous cartoons on the death of a celebrity or one who has has yet to die but has committed some other act deemed worthy of our attention, such as dating other humans or being a complete train wreck. This leaves cartoonists who hover beneath the blare of the media megaphone, churning out work on under-the-radar topics like torture and women's rights, largely ignored. For The Best Editorial Cartoons of the Year, the bar to entry is so low – including scores of unprofessional work – that many cartoonists don't even bother to submit their work for fear of guilt by association. (The collection doesn't pay for reprints but will mail contributors a free copy.)

Prizewinning Political Cartoons (Pelican, again) edited by Dean Turnbloom, an annual collection published since 2008, ducks the question of who is the best by simply printing who is the most prizewinningest. And the collection is just that: prizewinners from U.S. competitions, from the RFK Journalism Award to the Pulitzers, presented in a slim volume of 109 pages but with comics printed in color and given the space earned by such prize-worthy work.

But right out of the gate, new problems present themselves. Mark Fiore, who snagged the 2010 Pulitzer for his brilliant animations and writes the foreword for this collection, is represented by screen shots of his work, without captions or context. After that awkwardness is flipped past, you are dealt a selection of largely well-regarded big names that seem to rotate in the prizewinning circle: Steve Breen, Matt Wuerker, Mike Keefe, Tony Auth, Nate Beeler. Wuerker's watercolors stand out as does the black line work of Auth, printed here larger than any space-strapped rag would dare.

The work of prizewiners Mike Peters and Jack Ohman are absent, with pages noting their wins and a simple line stating they were "unavailable for this edition." It's a shame that Ohman's work in particular wasn't included. His large, quarter-page strips for the Sunday Oregonian have earned him the SPJ and RFK Awards in recent years and are not available online, not available to anyone outside of distribution range of the physical paper. The standout in the collection is seeing the huge, intricate comics of Alexander Hunter printed regularly in the Washington Times as full page comics. Artists expanding beyond the single panel gag into more narrative work is a good development for the field and this collection – it's in displaying this work that a book can justify itself and its shelf life.

Contributors are still limited to prizewinners, but some of the award judges (the real editors of the series) have appeared open in recent years to bestow accolades on more inventive, involved work like this, with this year's example being Gary Varvel's "Path To Hope" series (winner of the Aronson and RFK). Perhaps with a broader interpretation of "prizewinner," say, including finalists as well, the collection could take off. Ted Rall's large full-page filings from Afghanistan to the Los Angeles Times (a trip I accompanied him on) would look well reprinted here and beef up the book's page count in the process. (He was a finalist for the Scripps Howard Award.) That and getting everyone to contribute.

Another option would be to expand to include international prizewinners, since many international cartoonists focus on major world issues U.S. readers are familiar with. As it stands, you have a book that gives you a feel for what is happening in the field, but with a high bar for entry that is inevitably going to overlook some truly great work. No true "best of" book exists for political cartoons. That is probably unattainable, but so far, Prizewinning is the only real contender.

Matt Bors is an editor at Cartoon Movement

There are different views when it comes to the political cartoon. It's up to the viewer to interpret.