In April we ran a special project in our newsroom for MasterPeace, asking cartoonists from around the world to give us their vision on peace. From all the submissions, MasterPeace selected 14 cartoons to be displayed at five Liberation Festivals in Amsterdam, The Hague, Haarlem, Utrecht and Wageningen. Here are some pictures to give you an impression: 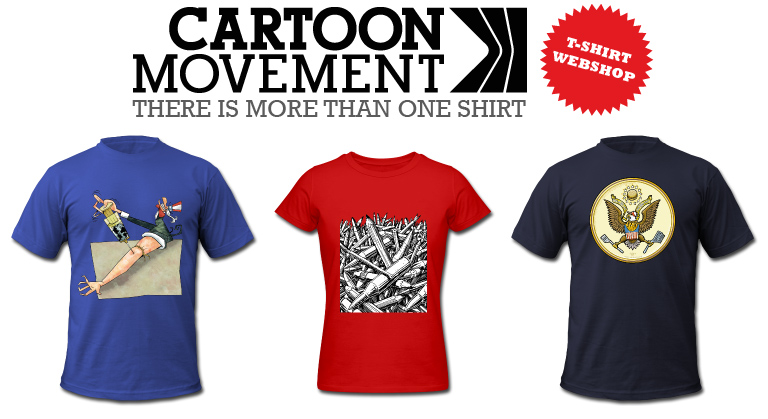 Of course it was only a matter of time before we started trying to squeeze some of the hard-earned dollars, euros and pounds out of our audience, but we think we found a way to do this that hurts the least.

Our official Cartoon Movement webshop opens today. In the webshop you'll find T-shirts with some of our coolest cartoons. We'll be adding new designs each week, and what's more, you can get any of our published cartoons as a T-shirt design. Just send us an e-mail to let us know which one you would like. And remember...there is more than one shirt.

For the last six months, I have been drawing local comics for the San Francisco Appeal, a relatively new web-only news venture in the Bay Area of California. For the last six months, I have actually been the only local cartoonist in one of the United States' biggest metropolitan areas, since Tom Meyer left the San Francisco Chronicle in 2009 amidst cutbacks. Other local outlets run syndicated cartoons on national and international, and less frequently state issues.  So for the last six months, I've had a unique experience of the trials but many rewards of being a local cartoonist, and I've come away troubled by the pervasive perception of local comics and cartoons.

My work differs from traditional editorial cartooning not only in its local focus, but also in its format and content. People tend to think of all editorial cartoons as portraying representations of larger issues -- symbolic, wordless, caricatures of national and international crises like the popular revolts in the Middle East, Planned Parenthood budget cuts and the Royal Wedding. I aim with my comics not to boil issues down to their essence, but to muckrake them up in all of their messy, complicated glory. I guess you would not call these traditional editorial cartoons, then, and I am fine with that. For many of these pieces, I actually talked to people for original reporting; I made phone calls, I got quotes. Sometimes I even left the house.

And I did all this to draw about some of the biggest issues in San Francisco. I've drawn about dysfunctional transit, skyrocketing murder rates, police controversies, and corporate bullying of local government. Just because it is local does not mean it is trivial.

Comics journalism is plagued by the same notion as editorial cartooning: that the hugest narratives -- the international reportage, the stories of war -- are the most worthy of space. I wholly disagree with this premise. Don't get me wrong: I love this work and I think it is vital. But it's not really what gets my juices flowing. My passion lies primarily in being heard.

The reason I wanted to be a journalist in the first place was that I wanted to have an impact. After several years of this work, the reason drawn journalism appealed to me was that it could have an even broader, more immediate impact than words.

When you draw a cartoon about your mayor, and you're the only cartoonist who is drawing your mayor, your impact is certainly greater than when you are one of thousands drawing Colonel Qaddafi. Your voice is arguably more important, and it's certainly louder. By doing this work, I have an immediate impact on my own community. A graphic I drew last year about poor conditions in downtown San Francisco got the local government's attention; a redevelopment committee used it in a presentation to the city, asking for funds to make change. I wish I weren't the only one drawing my mayor, and not just because San Francisco has some traditionally very easy-to-cartoon mayors. But unfortunately I don't see this changing any time soon.

While editorial cartooning becomes more homogeneous, in both style and topics, journalists are newly obsessed with creating deeper, richer local coverage. But there remains a lower perceived value for local cartoons because of the narrow way the editorial cartoon economy has evolved. The business models have come to dictate our art.

At the risk of telling you what you already know: as the noose tightens around publishers' necks, staff cartoonists are all but a notion of the past, and individual outlets are willing to pay less and less for individual cartoons, so cartoonists are pressured to create work that appeals to a broader set of outlets. That means work that appeals to the broadest set of people -- both in geography and ideology. We end up with cartoons all about the same thing, and all with nothing to say -- and we end up perpetuating this notion of cartooning to editors, who think that's all an editorial cartoon can be.

I would not be the cartoonist I am now without the last six months of local work, and I don't plan to leave it behind me -- but this story has an ironic if not downright sad ending, I suppose. As of two weeks ago, I am no longer drawing regularly for the SF Appeal. A site with modest means like the Appeal simply can't compete with the rates I am being offered by larger publications. I guess I've sold out to pay my rent. Right now I'm working on several comics on large topics for national and international outlets -- outlets with the budgets to take a chance on cartoons.

But that doesn't mean I'll stop knocking on those other local doors. After all, they're so convenient.

Susie Cagle has written and drawn for the SF Public Press and Bay Citizen locally, and Truthout and the American Prospect nationally, among others. She recently founded Graphic Journos, a collective of reportage illustrators.