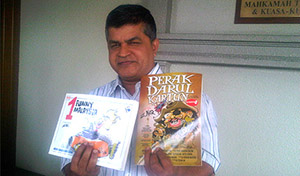 Malaysian cartoonist Zunar sends word that the case involving the government censorship of his two cartoon collections was heard by the court Wednesday and "Judge Rohana Yusuf will deliver the verdict on July 14." The government contends that the collections contain "terrible accusations" which could lead to "public disorder." Malasiakini also has a roundup of some colorful online comments supportive of Zunar.

Politico reported on an email spat between Doonesbury cartoonist Garry Trudeau and lobbyist Lanny Davis, who had represented embattled Ivory Coast president Laurent Gbagbo as he clung to power, and was called out by name in a recent Trudeau strip.

One of Cartoon Movement's contributors, Stephanie McMillan, took home the Society of Professional Journalists’ Sigma Delta Chi Award for editorial cartooning. While McMillan won in the category for large circulation newspaper, the other three winners were Mr. Fish, Mike Lester, and Ruben Bolling.