The visual language of editorial cartoons has a long history steeped in racial stereotypes, which has led to both a laziness on behalf of artists in relying on outmoded depictions of people and a current hyper-sensitivity in the public to see what isn't there–or at least, what wasn't intended––when an artist overlaps a pun with a radioactive subtext.

Hajo de Reijger, a Dutch editorial cartoonist, finds himself in one of those situations this week with a cartoon depicting Obama presenting the trophied head of Osama on the edge of a cliff. Hajo explains: "This cartoon is about the (misplaced) celebration over the killing of Osama. With a reverence to the stand-up comedy at the correspondence-dinner a couple of weeks ago." 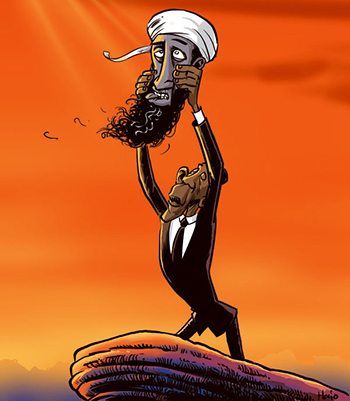 But the student paper at the University of New Mexico, The Daily Lobo, printed an apology after students complained that the comic was racist for depicting the president in a scene where the character was originally a baboon. (The Daily Cartoonist has the local news video.)

"It sometime happens that people 'misread' a cartoon," Hajo told me in an email. "In this case it's quite interesting and sad, because it shows how sensitive this issue still is in the US. And how insecure some people still are about racial equality."

Hajo said he doesn't believe the comic was published in The Netherlands, "but if it was, I don't believe it would have caused any uproar."

The uproars have happened with greater frequency in the U.S. since the inauguration of Barack Obama. A cartoon by Sean Delonas published in the New York Post in 2009, featured police shooting a crazed chimp said to have written the stimulus bill. The scene was pulled from real life when a chimp viciously attacked a woman, horribly maiming her for life. In the cartoon, the monkey is supposed to represent the leadership in Congress, but was immediately taken to symbolize Obama, leading to a national news story in the U.S.

"If I have to draw black people or other minorities, I make sure I never make fun of them because they're black or belong to a minority," Hajo says. "In this way it can never be racist."

What can or can't be seen as racist is the central problem in controversial cartoons. In America and Europe, these debates typically center around white cartoonists explaining to offended minorities how the perceived undertones were not intended and, often, with the dismissive tone of them being too sensitive to political correctness. I decided to ask some of Cartoon Movement's African contributors what they think of Hajo's cartoon, as well as the broader question of depicting minorities, particularly black people, in a way that could be seen as racist.

Victor Ndula, a Kenyan cartoonist, said the "depiction added little or no value to the cartoon. We all know racism links monkeys to Africans. If the monkey chants in Europe when African soccer players come to the pitch is anything to go by, the uncanny resemblance of Obama's mouth and the baboon character in The  Lion King raises eyebrows."

There are a few topics Ndula won't touch due to racial sensitivities. "As cartoonists, we need to be careful about sensitive issues. For instance, in my country Kenya, after the post poll violence it would be unwise for me to try and draw humor on a tribal basis, as it is still a raw nerve."

"I do not think the cartoonist is a racist and meant any harm with the concept," says Tayo Fatunla, a cartoonist working in Nigeria.

"Hajo though, whom I've met before, could still draw Obama holding up Osama's head without drawing him striking a monkey pose if he chose to," Tayo said. "And then again the responsibility of publishing cartoons of a cartoonist lies with the Editor. Cartoonists have a role to play in enlightening many through cartoons, depicting people rightly and cartoons should not be used as a catalyst for stereotyping any race or religious views."

Stereotyping is definitely not what Hajo was intending, he says. And that seems to be the issue when caricaturing a man whose depiction can be seen as a comment on an entire group of people. "The thing with this Obama cartoon is that I drew Obama, not a monkey, and not a group of Afro-Americans," Hajo said. "If Obama stands symbol for the Afro-Americans as a minority, then no one can ever make fun of him, because that would be racist."

I asked Hajo if would draw the same cartoon again. "I would make the same cartoon," he said.  "Maybe an additional one: me on top of that rock, holding this Obama/Osama cartoon, because it was the birth of quite a little upset."

Victor Ndula says he tends to think cartoonists should "leave the drawing of monkeys to African cartoonists. I would have no problem with an African drawing an African leader as an ape–it has been done before. The logic is that monkeys are indigenous to Africa and we have a few proverbs reffering to monkeys in our culture. As a cartoonist, if I did a drawing of a monkey it will be purely metaphorical, not racist."

"A few European cartoonists still draw and stereotype black people and Muslim people in their cartoons," Tayo says. "With time, they'll learn or time will leave them behind."

I think the rule of thumb I'd use is to ask: "If a person of low intelligence who doesn't get art at all and who is also completely racist saw this, would they howl with laughter and forward it to everyone in their email address book, with a message riddled with typos that maybe includes a 'HAR HAR LOOK AT THIS CARTOON!!'?"

In this case, pretty sure the answer is yep.

And in that case you're basically drawing propaganda for your ideological opponents.

There's no accounting for taste, perhaps especially in cartoons. Humor is very subjective. I sometimes find people reading my cartoons and enjoying them, but for something totally different than what I intended.

One of the common teaching techniques for creative writers is that they submit a story to the class anonymously, then have to sit and listen to the discussion without joining in. It's a valuable lesson, because it doesn't matter what you intended. Once the piece is in the hands of the public, it is what they see in it. I don't see why cartooning would be any different: Your job is to learn to create work such that your audience sees what you wanted them to see.

That is a very controversial topic. But IMO, it is about the person's discretion whether or not they should take action.