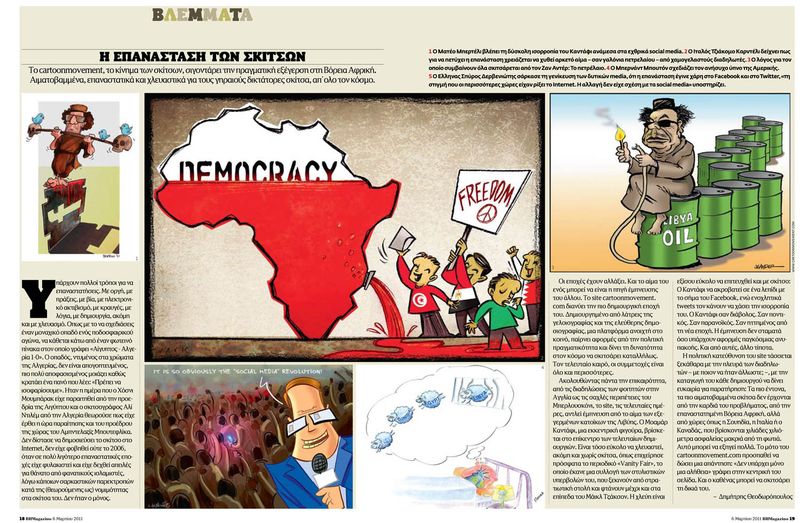 This post is an edited and translated version of an article that originally appeared in VIMAgazino, the Sunday supplement to Greek newspaper To Vima, on Sunday March 6, 2011. The online version of the article can be found here.

There are many ways to rebel. With anger, with acts of violence, with e-activism, with words, or, in the case of the Cartoon Movement, with powerful images.

The unrest in many countries in the Middle East serves as inspiration for the many cartoonists active on this new site, cartoonmovement.com. Created and run by cartoonists, the rapidly growing platform offers a publication platform for professional editorial cartoonists, and is open to the public to enjoy the fruits of their labor and to give feedback on the cartoons produced. All the cartoons and comics have a link to the political realities around the world.

Always following current events, the subjects range from the student demonstrations in London to the remarkable escapades of Silvio Berlusconi. In recent weeks, the focus has shifted to the bloody events in Libya. Muammar Gaddafi is easily mocked, even without the help of cartoons, demonstrated for example by Vanity Fair, that recently published a collection of the excessively styled military uniforms, some reminiscent of Michael Jackson, preferred by Gaddafi. Ridicule is also easily achieved with cartoons: Gaddafi teeters on a razor blade, and annoying tweets make him lose his balance. Gaddafi as the devil's partner. Gaddafi as a cornered animal.

The political direction of the site is clearly in support of the demonstrators, and their call for democracy and human and civil rights. The perspectives offered are from all over the globe, and the origin of the different artists gives rise to an observation. The most bloody, the most intense cartoons are not made by cartoonists from the Arab world, but by cartoonists from countries like Sweden, Italy and the United States, safely separated from the unrest and violence by distance. Whatever the reason may be for this, perhaps part of the answer lies in the motto the website offers. 'There is more than one truth', is written on the homepage; at Cartoon Movement, everyone can draw their own.

love the recipes- and using color makes it so much more fun- and a prettier presentation!

The quality of life and security for the citizens has been largely restored and we are a large part of why that has happened.