Review: How to Understand Israel in 60 Days or Less 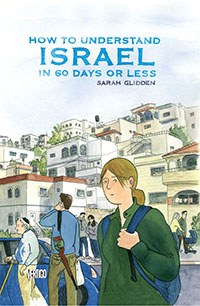 One of the most prominent works in the field of comics journalism right now is Sarah Glidden’s How to Understand Israel in 60 Days or Less (Vertigo, $24.99), a graphic novel recounting her 2007 “Birthright” tour of Israel. Cartoon Movement will be featuring exclusive new work by Glidden in the coming weeks, and in anticipation of that, here is a closer look at the book that launched her career.

Taglit-Birthright Israel is a program that offers a free educational trip to Israel to North American Jews between the ages of 18-26. Glidden, trying to get to the bottom of the Israeli-Palestinian conflict, braces herself for a barrage of pro-Israeli propaganda. She assumes the role of cynical, wisecracking observer, although her irreverence occasionally gives way to bouts of wide-eyed wonder. In page after page of expressively-watercolored artwork, she tours Israel’s famous sites, encountering some heavy spin as expected, but also engaging in conversation with left-leaning Israelis who complicate her tidy convictions. Glidden remains sympathetic to the plight of the Palestinians throughout, but grows increasingly uneasy at the difficulty of assigning blanket condemnations (“You would have come here too” she imagines a man in a painting – a Jewish refugee who fled the Nazis – telling  her). It’s a book about finding humanity, with all the ambiguities that entails, as opposed to black-and-white answers.

What makes the book a particularly effective piece of graphic storytelling is Glidden’s extensive use of imagination to convey a point. As the Birthright tour guide lectures, we find ourselves drifting into an imaginary courtroom inside Glidden’s head, with the author serving as judge, jury, and attorneys. “This court is now in session to hear the case of ‘Birthright is trying to brainwash me vs. Birthright is actually pretty reasonable,” Judge Glidden announces. It’s the first of many fanciful scenarios that play out in the cartoonist’s mind as she struggles with the Big Questions posed by the trip. Later, while listening to a speaker at the Kinneret Cemetery who is glorifying the early settlers a bit too much for her liking, she envisions herself bursting in on the early-1900s kibbutz, frantically flailing her arms and shouting, “WAIT! None of you are thinking of the consequences of your actions! What you’re part of will escalate into a war in which thousands will lose their homes!” As the tour progresses and Glidden becomes increasingly conflicted and full of emotion, we find ourselves back in her mental courtroom – only now it’s empty. The jury’s out.

While the subject matter is heavy, there are lighthearted moments as well. Glidden goes swimming in the mineral-choked Dead Sea (“I feel like this is a metaphor for something, but I’m not quite sure what.”). At various points, she gently mocks the ditzier girls on the trip. Later in the book, she encounters a shopkeeper in the Muslim quarter in the Old City of Jerusalem who used to live in New York; he’s a Yankees fan, she’s a Red Sox partisan. He jokingly threatens not to sell her a pair of earrings she’s been eyeing.

Hanging in the balance throughout the story is the question of whether or not Glidden will get to make a side trip to the West Bank at the end of her Birthright tour, to explore the other side of the Green Line. [MINOR SPOILER ALERT!] A combination of safety concerns and arrangements falling through unfortunately thwart her plans. This reader found herself wishing Glidden could have gone on to Ramallah – it would have made a fascinating coda to the book – but things don’t always go your way when you’re traveling abroad. With another trip through the Middle East already under her belt, though, we can look forward to getting more of Glidden’s perspective in the future.

Jen Sorensen draws the political cartoon "Slowpoke" and recently had a graphic travelogue published in The Oregonian. Her work can be seen at slowpokecomics.com.

Sight. I found this book much more tedious and whack than all the glowing reviews I had read led me to expect. On the other hand, I'm someone who is deeply involved in this issue.

Still, on the base level, I thought that Glidden's interactions were kind of...dumb?

Like at some point, one of her interlocuters says something like "How can you criticize us? Aren't you progressive? Aren't progressives supposed to not criticize people?" And Glidden's character thinks to herself "Yeah, thats true." And I thought to myself, no, that's really idiotic. (I don't remember the exact exchange, but it's when she's in the desert staring up at the stars).

Glidden basically buys the hype. Every time she asks a question she is reassured by the propaganda, which does a great job of making the propaganda seem more credible, but doesn't actually address any of the real questions.

There are no Palestinian voices in the story other than a Birthright-paid tourist guide. This work is billed as "journalism" but she never independently verifies anything Birthright tells her, never goes off the reservation to see things for herself, never makes any more than the most cursory attempt at critical thought.

Sorry, the panel is one where the Israeli says to Glidden: "How can a progressive be 'anti' anything?"