The Committee to Protect Journalists reports that 13 journalists are still missing in Libya, including Mohamed al-Amin, a Libyan editorial cartoonist. 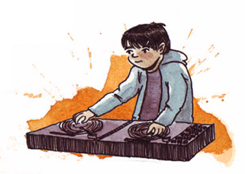 Kevin Kallaugher, editorial cartoonist for The Economist, recently gave a TED Talk on "The Magic and Power of Caricature."

Noise Pop, an indie music, art and film festival held last month in San Francisco, enlisted local artists to do a series of comics capturing their impressions of the performers, including Kid Koala, Yo La Tengo, Aesop Rock, and The Stone Foxes.

Our Comics Journalism Editor, Matt Bors, will be speaking on a panel at the National Conference For Media Reform called "The Future of Journalism Is... Comics?" on April 9th in Boston. Erin Polgreen, Susie Cagle, Ron Wimberly, and Sarah Jaffe will also be on hand to discuss the field.