French fashion company Louis Vuitton is (successfully) suing Nadia Plesner (29), a Danish artist and student at the Rietveld Academy in Amsterdam, for a work she made featuring the Luis Vuitton-logo. The work is a large painting (350 * 776 cm) titled 'Darfurnica'. The description is taken from her website:

Darfurnica is a modern version of Picasso's Guernica. In our time, the boundaries between the editorial and advertising departments in the media are disappearing and entertainment stories about the lives of Hollywood celebrities have become breaking news. Apparantly a genocide in Darfur can be happening RIGHT NOW without being important enough to make headlines. This is unacceptable and I refuse to turn the blind eye to what is happening.  In Darfurnica I have mixed some of the horrible stories I have learned about Darfur over the past years with some of the Hollywood gossip stories which made headlines during the same time period.

The work in question can be seen here. 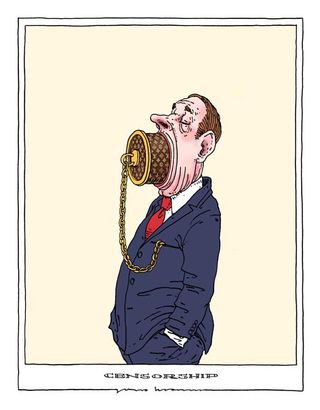 Louis Vuitton is apparently unhappy with the fact that in the painting, an emaciated African boy is holding a bag with a model and pattern closely resembling the 'luxury leather goods' that the company offers well-to-do Westerners. The company has begun a lawsuit, claiming 5000 euro per day that the work is still shown on the website and in art exhibits.

Yesterday, a court in the Netherlands ruled that the use of the Louis Vuitton look-a-like bag in the painting is indeed illegal.

In a broader context, the implications of this ruling for editorial cartoonists are staggering. If cartoonists are no longer able to make use of commercial logo's or company names (or anything too closely resembling it), making editorial art will become almost impossible. Any cartoons on the role of Shell in Nigeria will become illegal, as will drawing a link between McDonalds and obesity, and the thousands of cartoons on the BP oil spill should be removed from the Internet immediately, the papers and magazines in which they appeared shredded. These are just a few examples of the countless times brand names and logos (rightly) find their way into editorial art.

It is the role of editorial art to criticize, to create powerful visuals that make people stop and think. Darfurnica does just that.

In May 2010, the Cartoon Movement organized an international cartoon exhibition in Amsterdam about press freedom, There is more than one truth. For the exhibition, we asked well-known Dutch cartoonist Joep Bertrams to join the exhibit with a cartoon. The cartoon featured with this article was what he came up with; it was a great cartoon at the time, and it shows the predictive power an insightful cartoon can have.

At Cartoon Movement, we are vehemently opposed to any and all forms of censorship. With this article, we want to show our support for Nadia in her continued fight against Louis Vuitton. To support Nadia and her work, go to her website.