When I draw editorial cartoons, I want them to do one or both of two things: expose the system and encourage resistance.  In this era, when life on this planet is being systematically killed and converted into profit, and human beings are crushed by exploitation and oppression, to make a principle of creating apolitical art is worse than useless. In fact, in a time of acute crisis, there is no such thing as apolitical art. Whatever the intention of the artist, art that does not promote resistance (overtly or tacitly), in effect supports the status quo.

Purely decorative art does have its appropriate place and time: a time of peace, harmony and sustainability. Unfortunately, we don’t live in such a time. Today, the world cries out for a culture of resistance, art that contributes to building a movement to fight back. We are in a state of emergency, and conditions demand that artists (and everyone else, for that matter) be engaged in the process of putting an end to this system and transforming society.

Editorial cartoons are by nature critical. When asked why his work is always negative, one cartoonist points out that “a positive cartoon is called a greeting card.” I would add that a neutral cartoon is actually an illustration. The function of editorial cartoons is to attack and subvert those in power and their official pronouncements (which are, inevitably in class society, lies).

Editorial cartoons may not often be radical, and are rarely revolutionary, but if they are good, they are always oppositional. This is true even in parts of the world where open opposition is a death sentence. Under such conditions, a cartoonist’s opposition may be subtle or concealed, but it is always there. Readers perceive this. It is the reason readers love them. 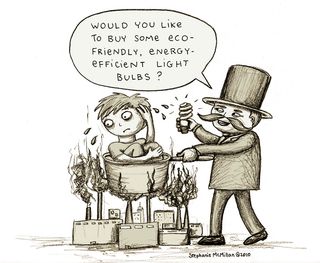 Editorial cartoons reveal truths about current events and politics while making the reader laugh, usually in bitter recognition. The form – an image in a box, with or without a bit of text – forces the message to be pared down to its minimal essence. When done well, a cartoon reaches the reader’s consciousness with instant clarification, turning a previously complex or obscured concept into something now obvious.

I have often used the phrase “resistance through ridicule.”  When we use humor to expose absurdity and hypocrisy, and inspire our readers to laugh at those in power, then we help our readers to be less afraid.  When our respect for the powerful switches to contempt, we can better imagine them toppling from their lofty positions.  We can imagine toppling them ourselves.

Stephanie McMillan is an editorial cartoonist/illustrator based in Fort Lauderdale, Florida.  You can check her comic strip – Minimum Security – published five times a week on United Media’s Comics.com and minimumsecurity.net.  She also publishes "Code Green," a weekly editorial cartoon about environmental emergency.

This post was published originally on the VJ Movement blog

Wow! It seems that you really have good use for the cartoons that you draw. Expose the system and encourage resistance? This is something that most people do to actually help the people and the government.